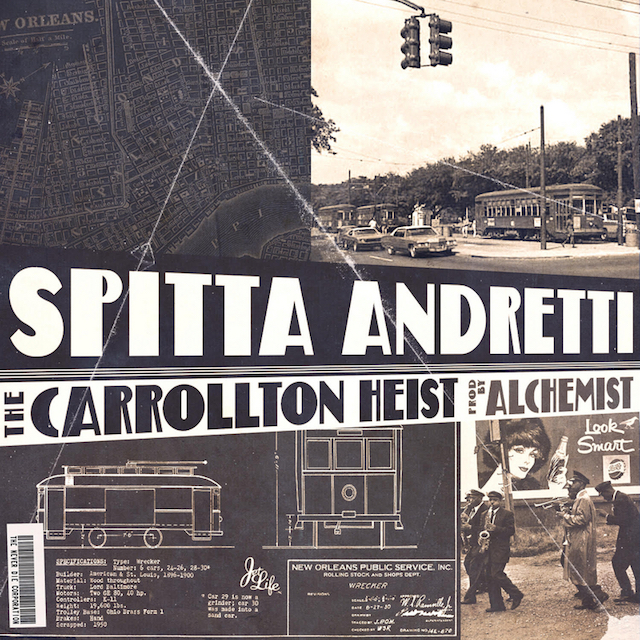 On December 18th, 2013 around 10:45 A.M. three masked individuals stole more than $280,000 from an armored truck as one of the security guards was unloading it to transfer to a Chase bank at South Carrollton and South Claiborne avenues in New Orleans. More than two years later, none of the money or suspects have been found with only scant information about their getaway and a potential suspect.

Curren$y’s first collaborative project with beat gawd Alchemist in five years, Carrollton Heist, is not a narration from the perspective of someone involved in the actual Carrollton heist. It more so plays like the soundtrack of the aftermath of getting away with your own plan. Before he raps on a number of songs Curren$y says “let me out right here,” Alchemist fades in beats with the faint sound of a car motor on a number of records and splices in samples from Stanley Kubrick’s 1956 horse track heist film The Killing. This is cinematic Spitta.

Carrollton Heist is a loosely told story of how Curren$y “never switched, underground nigga, mainstream rich” and the process of him reflecting on what it means to get away with it. Aside from the overarching heist theme, the biggest driving force of Carrollton Heist is Curren$y basking in being an O.G. He’s always good for some slick talk, but after nearly a decade of being one of the most productive MC’s in the blog era of Hip Hop, he’s talking of how he “walked the walk, I run it now” on intro “Cartridge.” He “worked for this position I earned it, so I don’t need permission or permits” on “Black Rally Stripes.” He thinks “a couple Rolleys and Bentleys will make them understand” his longevity in the game on “Vibrations.” Carrollton Heist features some of the most reverential lyrics of Curren$y’s career.

Curren$y does not just bask in his own gangsta, but reflects deeper into his past. “Vibrations”, which samples Roy Ayers’ live rendition of the song of the same name, features nothing more than a sprawling trumpet playing, soft bass line and light drums which fits Curren$y’s penchant for loose structured verses perfectly. With the southern drawl, repeated refrain and borrowed chorus, “Vibrations” is a clear ode to fellow New Orleans Hip Hop legend, Juvenile’s 1998 hit “Ha”.

It’s the dizzying “Inspiration” that hijacks the entire mixtape and breaks repeat buttons. Over a warped mellow beat that sounds like Pink Floyd, circa-Dark Side of the Moon era, Curren$y muses about a lady assassin scaling mansion walls, being “cooler than a Polar Bear’s toenails” and dodging crossfire in a Ferrari. These verses, where it sounds like we’re sitting in on a smoke session with Curren$y piecing together a cogent, stylized story as the smoked-out thoughts appear, no matter how random, are Spitta at his best.

Alchemist, for all intents and purposes is the director of this project and the production on Carrollton Heist flows like a score with most of the beats being relatively bare and more complimentary. The continuous pulsing sounds of “Black Rally Stripes” is the perfect nightmarish backdrop for Curren$y’s “Bourbon Street secrets and avenue scams.” The album is not as dark as Curren$y and Alchemist’s previous Covert Coup project, but Alc still injects his trademark menacing piano chimes and brooding bass lines on songs such as “500 Pounds of Gas.” As the soft horns fade in against the sounds of crashing waves and Curren$y inhaling smoke on the closing song “Smoking in the Rain,” pictures of sailing off into the sunset a painted in the auditory sense. Without Alchemist’s production, the story would have been lost.

There is also no guest performance on Carrollton Heist as overwhelmingly dope as Freddie Gibbs’ “Scottie Pippen” verse from the first mixtape. Lil Wayne does give his most impassioned guest verse in years on the penultimate track “Fat Albert”. Action Bronson on “Inspiration” and Styles P on “Disappearing Ink” are logical choices for each respective track, but both deliver forgettable verses marred either by brevity or uninspired lyrics.

In the end, Curren$y and Alchemist prove Covert Coup’s excellence was not a fluke on Carrollton Heist. Now, what’s the next caper in Curren$y’s career?