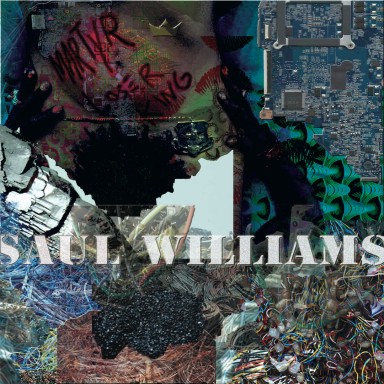 The refrain of “fuck you, understand me” from “All Coltrane Solos At Once” is probably the one that will resonate most with listeners when they hear MartyrLoserKing. But another line from later in the album may very well better capture the entire mood and themes of Saul Williams’ latest project to greater effect. It’s the lyric, “Don’t ever give up on me, don’t ever give up on me / Even when I’m tortured by my arrogance and too selfish to be free” from the trenchant “No Different.” And it’s important because it seemingly is Williams speaking to and about himself, but also tapping into the inner dialogue and struggle of his audience. It is a talent, along with making complex, intricate music that wedges itself into the listeners’ consciousness, that few can rival Williams at.

Saul Williams’ work and art has always been seared with fiery social and political commentary. But MartyrLoserKing contains two constant and anything but subtle themes of raging against the machine through any means possible, especially through art, and combining the tribal and the ancestral with the electronic. Throughout the album, as with his previous art, it is Williams’ intention to push, challenge the status quo, his audience, and himself into being wholly uncomfortable, and he never lets up in the slightest. “Groundwork” starts the album off with a slow, simmering tribal feel that’s foreshadowing of the rest of the album. And soon enough, those themes come back to us in full force. “Ashes” is a clear nod to both America’s dilemma with police brutality and the hypocrisy found within the power structure. While later on, Williams’ “hacktivist as a martyr” theme reaches its apex on “The Bear/Coltan As Cotton” as Williams’ finds himself on familiar ground, spitting sharp poetic stanzas on topics ranging from addiction to social media to the ills of capitalism.

To be fair, producer Justin Warfield deserves a boatload of credit for molding some powerfully complimentary sounds for Williams’ to get loose to. Having worked on past projects with the likes of Rick Rubin and Trent Reznor, it’s natural to think that MartyrLoserKing might not pack the same musical ammunition as past works by Saul. Doubts like those quickly become a distant memory as Williams and Warfield bring their respective artistic prowess together to create a well-integrated and unified album that focuses on getting the small details right, but not without forgetting the big picture in the message. From the frantically mashed up fusion of poetry, industrial music, and garage rock on “Think Like They Book Say”, to the slogging, thumping and adventurous beast of a musical collage of “All Coltrane Solos At Once”, Williams and Warfield ensure that the album makes very few mistakes.

The only real drawback to MartyrLoserKing is that it can be hard to digest everything that’s going on. And there’s a lot to take in. Fusing elements of poetry with Hip Hop, punk rock, soul, R&B and techno, Saul Williams isn’t and never will be an artist that you can place in any single box. Most times, it works to his advantage. Other times, not so much. And with much of the album’s inspiration reportedly based on a fictional African miner-turned-hacker from Burundi with the screen name “MartyrLoserKing”, some of the nuances become lost-in-translation.

Williams isn’t here for you to simply digest his art and move on. He wants it to stick to you, to stay in your heart, mind and soul, the same way it does with him as the artist. And MartyrLoserKing accomplishes just that without question.