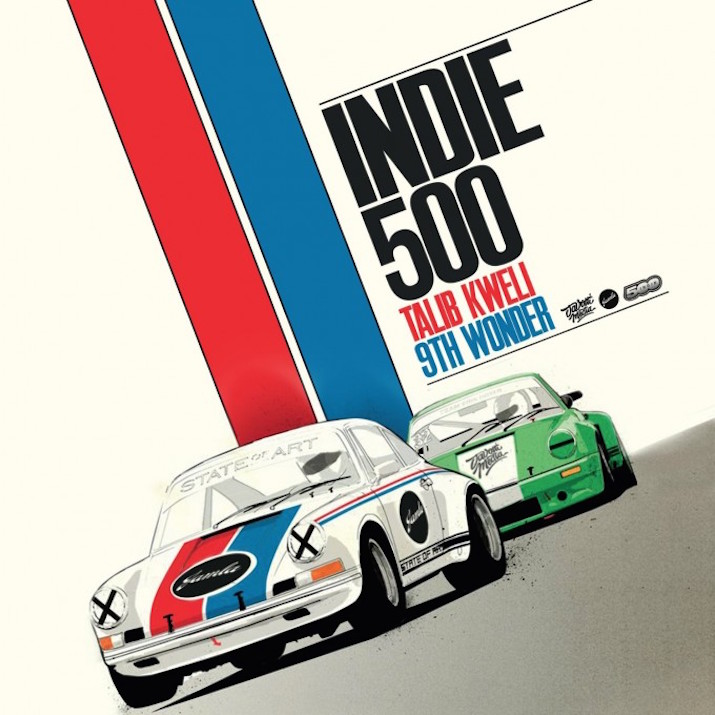 Conscious Hip Hop, one of the genre’s most debated and disputed sects, can be divided into two sections: those artists that try to spread their message – whatever it may be – in a package that will largely be accepted by the mainstream, and those that do little to sugarcoat their delivery, forcing the listener to acknowledge what are often harsh truths about everything from racism to government corruption. Brooklyn emcee Talib Kweli is largely known for the latter.

On his 12th studio album – his third this year – a collaborative product with legendary Fruity Loops producer 9th Wonder titled Indie 500, Kweli and a host of like-minded rappers take an in-your-face approach to discussing many of the hot topic issues that have recently made headlines, such as the shooting of Michael Brown and inequality. They also touch on rap tropes such as money, cars and clothes.

Indie 500 opens with a bold question: Which side are you on? Before Kweli even enters the track, lines like “Justice for Mike Brown” are repeated on the appropriately named “Which Side Are You On,” setting a tone that is as unsettling as it is powerful. Kweli’s answer? “The silence is unappreciated / I’mma go ahead and take that as disrespect. / Silence is death. / Get off the fence, son. / Who will stand to defend us? / If you ain’t with us, you against us.”

Over the hum of a moody electric guitar, the hymnal vocals of Kendra Ross and a moving, albeit disjointed bass line, Kweli and Tef Poe take shots at celebrities, the judicial system and police brutality as they dissect the killing of Michael Brown in Ferguson, Missouri and the aftershock that followed. While similar topics are discussed throughout the album, including Indie 500’s second song “Every Ghetto,” the change in subject matter, which switches from frustrated and preachy on “Which Side Are You On” to angry and biting – both at society and other rappers – on the latter, keeps the album moving. At times, the melting pot of moods can even be found on the same song.

Lines like “The startin’ salary, it’s hard reality. / Find solidarity / We got our leaders too, but where they lead us? Do they leave us or they see it through?” on ‘Every Ghetto” show Kweli’s rage against sociopolitical inequality; others like “They say consciousness mean a nigga ain’t rugged. Until they get beat within an inch of it. / Self-made niggas don’t get discovered. They actin’ like you owe ‘em somethin’. Homie, I don’t owe you nothin’,” later in the track put one of underground Hip Hop’s biggest topics – the struggle to succeed while remaining true to oneself – at the forefront.

Knowing full well that 13 tracks filled with frustration, anger and angst might get redundant, Kweli and 9th Wonder skillfully maintain Indie 500’s ethos as a hard-hitting underground Hip Hop album without sacrificing its integrity. Rather than pair intellectual tracks with those more suited for the radio, a tactic used by some to convey important messages without losing the backing of a label, the duo and their various counterparts – including Hi-Tek, Problem, Khrysis, Pharoahe Monch, Slug from Atmosphere, Rapsody and more – gradually shift the subject matter from track to track, resulting in an album will appease Hip Hop purists no matter their mood.

From “Pay Ya Dues” through “Prego” – in which Kweli fights back at his critics with the line “People want me to preach ‘cause I’m where heaven begins. / People want me to teach unless the lessons for them.” – Indie 500 takes on a cocky tone before coming back down to Earth on the more somber, introspective “Life Ahead Of Me,” and “Great Day In The Mourning,” a tribute to Hip Hop’s fallen legends. After the brief reprieve, the boisterous sentiment returns on “Don’t Be Afraid,” which features Jordan’s and Benz’s in stark juxtaposition to K’Valentine’s tales of starvation and struggle on the ensuing “These Waters.”

Ultimately, Indie 500’s message is a muddy mix of wealth, poverty, fame and inequality that caters to those favoring Hip Hop’s underground sect. The beats, much like the rhymes overtop them, take inspiration from various influences, and while some may point to a lack of continuity, others will find that Indy 500’s variation serves to keep it interesting and enjoyable.