Ta-ku - Songs To Make Up To 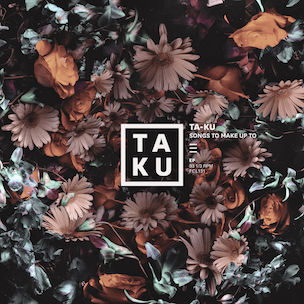 Relationships are some of the most important events in our worlds. There is this notion, now, that no one needs anyone, even though social media shows us that everyone needs everyone. That, more than any other single effect in someone’s life, we will remember when we were together with the most ardor. As such, and because these ideas are inverse, we push away when we mean to huddle close. Ta-ku, the Australian producer, artist, photographer, and musician believes in the power of digging your toes into the sand and holding hands with someone you love. He believes in it so strongly that 2013s Songs To Break Up To broke through the cloud surrounding instrumental mostly (or only) releases and hit it big. This time, he came back with Songs To Make Up To. Which sounds like a sun shower on a clear day, legs crossed in a park, and you’ve somehow elicited the belief in your other that maybe this can work out.

He didn’t ride out to do it alone. JMSN and Sango join him on track two of eight “Love Again” where JMSN croons, “So I don’t want to do this again / See this ain’t the time to pretend / You know I’ll make it better if I can / ‘Cause I don’t want to do this shit again.” But between the vocals, Ta-ku’s delicate, soaring production shines through to create a sense of hope and belonging. This is Ta-ku’s true gift: The ability to initiate sounds that convey a meaning directly. There are the brilliant abstractions of Flying Lotus, but his sounds morph and melt away in complex ever-changing patterns. Ta-ku’s music is by no means simple, but it does not toy with you the FlyLo does, allowing you to dissolve into its slightness.

It is light and delicate. On “Sunset” featuring Jordan Rakei, the clouds break and the notes are filled with the sounds of a clock ticking away into forever. Then, the synthy, deeply flowing gem “Fall4You” featuring Sunni Colon seems to fall directly out of a wide-open sky. But more than that, Songs To Make Up To seeks to draw from the less cynical side of your brain and drag you into the open with its plucky piano instrumentals and gentle snapping. It is dangerous then, in that it may just allow you to do so without coming off as some kind of sap.

The movement then plunges through with “Work In Progress,” which literally sounds like a fully formed skeleton of a track. But, the crown jewel of the collection is the last song to make up to, “Down For You.” Alina Baraz drudges up the worth of your humanity and dares you to connect while the production haunts and cajoles. “Are you down for me? Down for me?” she repeats. “You still down for me?” And that’s what you wanted to hear all along. That’s the real cheat code of making up. You have to know whether or not you’re still down.