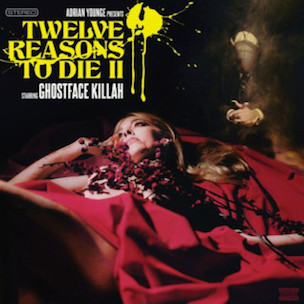 Though never a household name, Ghostface Killah has spared no opportunity to extend his brand as the unspoken savior of the Wu-Tang Clan’s legacy. Amongst his tireless run of projects there’s been his well-regarded solo discography (including Ghostdini: Wizard of Poetry in Emerald City, a foray into R&B), an audio book with MTV, the Wu-Block group project with The Lox’s Sheek Louch and an awkward appearance on television’s “Couples Therapy”, proof positive that his ambition is truly limitless. An elder who has survived multiple generations and outlasted former peers (not to mention flash in the pan sensations), Ghost can do little to no wrong in the eyes of his devoted cult following. But with Twelve Reasons To Die II being his fourth album in two years, it has to be questioned whether his latest spurts of productivity are quick cash grabs that compromise his once thorough track record.

While serious Killa Bee fanatics blindly give the Clan’s offshoot projects benefit of the doubt, the Twelve Reasons To Die series may be a hard sell. For one, composer Adrian Younge isn’t quite a traditional Hip Hop producer. Where he’s well versed in the genre (and his music was sampled by DJ Premier on the Royce Da 5’9 collab album PRhyme), his musical core competencies stray outside of Ghostface Killah’s comfort zone. The challenge Younge faces in scoring cinema Rap is not only achieving synergy with various acts but doing so over the course of whole projects.

With Ghost forced to follow a continual rigid storyline for two albums now, this emphasis on structure leaves him unable to play off of the comedic unpredictability that is one of his greatest strengths. Twelve Reasons To Die II is the latest conceptual chapter in a detailed saga where the spirit of Ghostface Killah convinces mob kingpin Lester Kane (played by longtime cohort Raekwon) to sacrifice his life so they can become one. While neither “Return Of The Savage” nor “King Of New York” contain the adventurous soul or grit that has enabled Ghost & Rae’s prior greatness, it may be unfair to hold them up to prior standards. Not only is Adrian Younge’s work far more intricate than the soul loops they’re accustomed to, the duo has rarely been forced to deviate from the characters they’ve played on wax over the past two decades.

A swift departure from convention is taken as Twelve Reasons To Die II replaces the original cast of Wu cronies with an ensemble mostly based out of California. As a member of the Living Legends crew, Scarub is worlds apart from Staten Island without much overlap, resulting in little chemistry found on “Rise Up”.  Things go even further off of the rails as “Death’s Invitation” throws a complete wrench in the script’s climax. Here Scarub, Lyrics Born and Chino XL bring experimental, off-kilter flows behind a slow jazzy beat, a creative moment that is confusing and not even remotely innovative. The most prominent guest appearance comes by way of relative newcomer Vince Staples on “Get The Money”, with a verse that is effective yet less organic and seemingly more of a promotional ploy for Adrian Younge and Ghostface Killah.

The majority of Twelve Reasons To Die II is Adrian Younge’s mere reinterpretation of Ghostface Killah’s beloved crime tales. “Black Out” comes close to a vintage feel, but the tracks ultimately distract from the album’s plot. Narrated by RZA, the surprise ending sets up an inevitable yet unnecessary third part to come down the line. While Ghost can tell a story and his skills are sharp (despite Action Bronson’s recent claims to the contrary), he’s sounded far more at home on this past winter’s Sour Soul LP with Hip Hop jazz band BadBadNotGood. If we’re to be force fed more full-length projects, the long-awaited Supreme Clientele 2 needs to maximize Pretty Toney’s potential, lest his credibility be further tarnished.