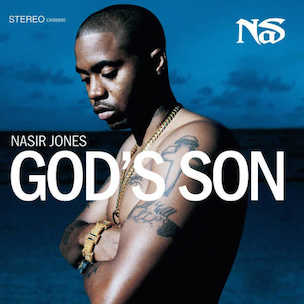 There’s a couple hundred Hov‘s, but there’s only one Nas. God’s Son is further proof that Hip-Hop’s most prolific writer is in a class all of his own. Nas came in the game all by himself. Nas changed the game all by himself. And though it seemed he made a deal with the devil and aligned himself with the anti-Christ(s) of Hip-Hop (Murder Inc.)-he will finish by his lonesome. But for some reason ever since Jay called him out on the Summer Jam stage in 2001, you can’t mention the Queensbridge emcee without Shawn Carter‘s name following in the same sentence. Let’s get the comparisons out of the way…

If Jay-Z is B.I.G., then as much as it pains me to say it, Nas is ‘Pac. Shawn can be Euro-Jay; Nasir will wear the crown of leader of the five boroughs. Hov is the Hip-Hop Industry, Nasty Nas is Hip-Hop. Both are great at what they do. They’re two completely different men, with two distinctively different styles. One isn’t better than the other, it all lies in the preference of the listener.

Moving on. With God’s Son, Nas picks up where he left off at on Stillmatic by delivering pure unadulterated Hip-Hop, but it seems this time around he worked the kinks out. Missing is any type of song that world resemble the wack-as-fuck Braveheart Party (and just because it was removed from the second pressing, doesn’t mean we forget, nor forgive). The result; a well thought-out masterpiece with very dark and moody undertones. Recorded after the passing of his mother, you can hear the influence and the toll it took on him in just about every song. On My Heaven, Nasir poses the question, If Heaven was mile away would I pack up my bags and be out the front door in a flash? You have no choice but to feel his pain.

With an album filled with nothing but highlights, it’s hard to mention one track without feeling like you’re neglecting another. The Last Real Nigga Alive, is giving people something to talk about, completely obliterating Jay-Z without even flat-out dissing him.

An article was brought to my attention recently that’s headline read “Fuck Hip-Hop.” I didn’t read it, though. I was too busy listening to God’s Son-loving Hip-Hop. But hey, what can I say? I’m a slave to a page in his rhyme book.