Jeremiah Jae & L'Orange - The Night Took Us In Like Family 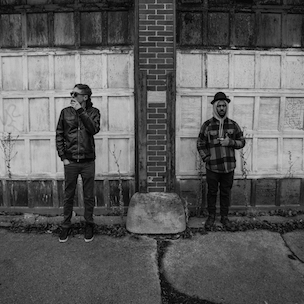 Before Netflix took over the world’s living room, Blockbuster and sometimes the local library was the destination for many to decide what feature film would entertain the family after dinner. And if you were a little more adventurous, you would explore the Foreign Film and even Independent Film section. If those simpler times still existed, you would be so lucky to stumble upon something like Jeremiah Jae and L’Orange’s The Night Took Us In Like Family.

The once Brainfeeder, now Warp, Chicago emcee who was never afraid to experiment with nontraditional hip-hop sounds-Jeremiah Jae-and Mello Music Group, North Carolina producer who is capable of telling stories without words — L’Orange has filmed their own 1940’s noir and presented it in five installments. It’s billed as an homage to the origins of gangster flicks and gangster Hip Hop, alike. The torpidity in Jeremiah Jae’s voice and gruff description in his lyrics paired with L’Orange’s knack to flip unsuspecting samples beyond recognition are promising on paper, if you’re familiar with their prior work. Instead of one plotline, the album is broken down into five vignettes that are narrated by Jae but could easily be interpreted as five different stages of five different stories. And within the interludes and ends of songs, L’Orange chops up enough film dialogue samples to serve as the Greek Chorus in case you get lost in the minutiae of Jae’s raps.

From line to line, Jeremiah Jae flexes his tough guy bars but also shows hints of vulnerability. He jumps from pointing a .38 special in your face to seeking divine guidance to describing how deep his crew rolls. After all, a complex protagonist makes for a more interesting story. A couple of his shining moments come on the shoot out scene on “Taken by the Night” and the darkly romantic description of Jae’s hometown on “Underworld.” But as part of the larger picture of the album, it seems like the idea of putting the songs together on the same project was an afterthought and not the blueprint. Also, in the context of his previous work, his metaphors and persona aren’t as novel. But added to all of these loosely related scenes are thick fog and an operatic mafia movie soundtrack provided by L’Orange. The producer proves that you should be paying as much attention to the production as the words as he pulls out new samples mid-track and then peels layers back right after to reveal an underlying rhythm you may have initially missed.

Two other emcees, Gift of Gab and Homeboy Sandman, who have their own unique, steady flows like Jae hold down the two feature spots. It would have been interesting to have more engaging roles for them like character names or some kind of significance to the plot of the album. Overall, the album has replayability due to both the emcee and the producer, but favoring the latter slightly more. But like most rare, independent finds in the movie section of your local library, it loses its luster after so many plays.