Vic Spencer - The Cost Of Victory 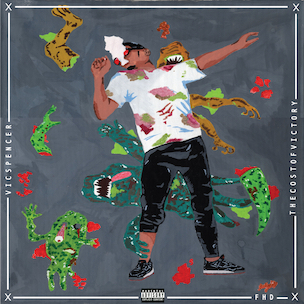 Despite the efforts of even some of the most innovative artists, labels have the ability to attach themselves like parasites. In the curious case of Vic Spencer, however, audiences are still quite unsure what to make of him. In his early thirties — an age when most emcees have either slowed down or at least found their comfort zone — Spencer is the ultimate musical contrarian. Throughout past projects such as 2013’s The Rapping Bastard or 2012’s Walk Away Music, there are only a few consistencies that seem to surface. Incredibly competitive, not easy to buy and packing a wild card’s imagination, the East Side Chicagoan’s latest project, The Cost of Victory, is another middle finger to the mainstream and anybody who doesn’t respect the craft of writing.

It’s a safe assumption that the number one word used on this project is “Rap” and Spencer does not use the word as a compliment — unless he’s speaking about himself. It’s a clever strategy and while “rappers who rap about Rap” have often been criticized, Spencer’s skill with wordplay keeps you pushing through the project. From the outset, the sparring, disrespectful style takes aim at wobbly millennial rap tropes. On “Carrot Juice,” he declares plainly, “On a cold night, on the corner of Belmont and Clark / I say ‘Fuck all of y’all’ with an exclamation mark,” and goes in on “Fashion geeks and Ye clones.” In the same song Spencer drops little gems like, “Always follow your number one gold rule / Food for thought: God never wore jewels.” This is characteristic of much of the album.

What is remarkable about The Cost of Victory is that every song can stand alone and if rearranged in any particular order, the album would still retain it’s sound. That is not say that there is no clear narrative but instead that by the measures of production and lyrical dexterity, moments of tension, relief, humor, grit and introspection exist on simultaneous plains. The album’s production is predominantly boom-bap yet not a rendition of the 90s. It is true that songs like “Sony Walkman” feature Spencer feeling a little nostalgic. However, it is his personality channeled through his unorthodox approach and immovable voice that dismisses any claim of him pining for any time frame in Rap. It is also his approach that makes every beat, at any tempo, submit to his pace and cater to his cadence.

Features on the project are not many but are of excellent taste. The most memorable collaboration, perhaps, is “Jungle Gym” with Sean Price and ILLA Ghee. Together the three are violent misfits. Ghee raps, “Clown your whole circus, the meaning of life is no purpose/Download my app of multiple crack verses,” and Spencer likens the strength of his flow to the pungent smell of “panther piss.”

The Cost of Victory really has so much to offer its listener. Despite Spencer not being new to the game or as young as the rest of the Chicago premieres, he is at the forefront in terms of artistry. While 2015 is still fresh, this is an offering sure to echo into the close of the year.