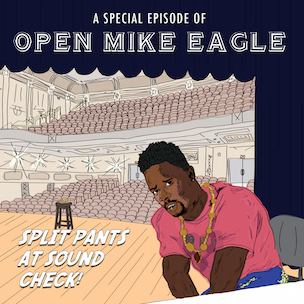 What makes something special? In Open Mike Eagle land it’s diametric ideas dancing together in the moonlight, giving way to nothing, just existing for the pleasure of it all. And what of it? The thing, which gives, takes as well, and in our world — where college degrees mean little more than participation certificates —an education might steal your soul. It’s a little truth they forgot to tell you, that the pendulum swings back to you. But you find it out soon enough when Sallie Mae comes-a-callin’.

“I graduated college / I purchased all the extra books / I should be living in a house with a breakfast nook.”

The Mello Music emcee is laughing. Not the way you and I do when we see our favorite celebrity get memified and we travel down the rabbit hole at their expense. No, he’s laughing like someone whos antenna is up, and that’s what’s wrong with Mike Eagle’s music: it’s too self-aware. It makes hasty decisions. On “Dark Comedy Late Show” over a jukebox exorcism (an interpolation of last years opener “Dark Comedy Morning Show”) done by Exile like slowed Looney Tunes or drunken show tunes, he dives in. A series of contrasts follow, ideas whose eyes meet across a room and there’s glass on the floor Die Hard style. They dance anyway. And the whole EP unfolds with a protagonist that suffers from good old-fashioned Dr. Seuss poisoning: “Oh, The Places You’ll Go!” But the waiting place has caught him, and he’s sitting there, rapping to himself and waiting for a train to go or the snow to snow.

Things only get more hilarious, depending on who you are, and Mike spits some of the most mind-bending bars of his career, dropping Boko Harem, ISIS, and juxtaposing their existence against mundane activities like your wife getting her nails done on the same fractured, splintered beat on “Raps For When It’s Just You and the Abyss.” He is more raps’ Bret Easton Ellis, making you feel the inertia of existence through absurdities over glitch-y, dreamy 16 bit production.

The thing falls down when his friends join in. It feels nonsensical, in this un-thrill ride through Mike’s mental states that someone else should chime in. They feel like voices of a shattered ego with at one point MC Paul Barman exclaiming, “Nu-ance are the new wants,” with flourish. But it just doesn’t stand up to Mike’s own meanderings like, “They like to say we’re post race so they can give us MGK and take Ghostface.” Ouch.

There’s a calcified sense of vulnerability to Mike’s music that can make you push him as the poster child for the unaffected apathy that other generations tell milennials are swallowing them whole. Rather, he is the correspondent on the front lines of the ideology war. In an interview with DX he stated, “I don’t think business will ever invest in personal, fragile Hip Hop the way that it does the materialistic stuff. Inherent in that is this consumerism that helps that to make money perpetually.” And with that, he still finds a way to laugh.