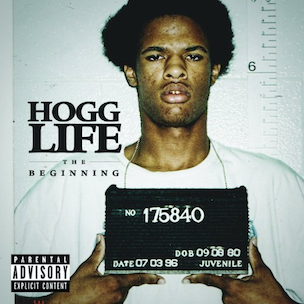 In an era where having a major label deal may actually be a hindrance to your success and sustainability as an artist, going underground and retaining the rights to your creative vision, publishing and distribution is likely advantageous. Thus, a review of veteran Houston emcee Slim Thug’s latest life retrospective Hogg Life: The Beginning must begin with noting that it’s independently released and part of a larger documentary release about the early life of the well-respected rhyme-sayer. In fourteen tracks, Slim Thug digs into his pre-stardom creative and commercial motivations with sounds both classic and modern being used (with varying levels of success) to articulate his vision during the “Boss Hogg’s” early career.

Atlanta’s trap and Houston’s soulful swing existed together in the same early 2000s generation, but the two never truly mixed. Atlanta and Houston were both attempting to establish their dominance as newly minted mainstream Hip Hop locales so unity in their sonic motivations was rare. However, a decade later, this album’s producers B. Don and GLuck attempt (and succeed) at being aware that Atlanta’s half-time tempo, snare and 808-laden productions rule the Rap and Pop roost, while still retaining a few moments of Houston’s old-style legacy. Slim Thug is smart to lean in this direction, but it still makes those who want another “Like A Boss” or “I Ain’t Heard Of That” classic left longing for something extra from the release.

Lead single “The Top” is a fine example of this bizarre “Texas Turn Up” that dominates the album. “Self Made” features new school Houston representer Sosamann. The ominous swirling synths over the tough half-time breaks mixed with the emcee’s squawking boasts sounds more Gucci Mane than Pimp C, a clear sign that things done changed on the Gulf Coast. Other young emcees Chayse, M.U.G. and Propain are here too, a clear sign of Slim Thug attempting to stay aware of the young making claims at his now long-time throne. The true standout of the trap-heavy fare involves the Sauce Twins on “Money Fever,” the whole song feeling at best like Migos on lean — engrossing, yet also boisterous, bizarre and entertainingly misogynistic. The duo’s proclamations that they’ve “run off with [your] bitch” sounding well in-line with where rap-as-pop at present is centered.

If wanting to listen to this album for more traditional Houston fare, Slim Thug partners with underground Texas legend Z-Ro on four tracks (“Smokin’,” “Too Much,” “55” and “RIP”). Given that the album is thematically supposed to be a memory of things past in the emcee’s life, “RIP” may be the album’s best overall song. An equal blend of filtered soul and purple sizzurp, Slim Thug shouting out Houston-legendary producers Fat Pat and Rick On The Track as well as “pourin’ up with (chopped and screwed legend) [DJ] Screw,” it’s the type of track that isn’t going to set Billboard on fire, but then again, that’s not the point here, either. Z-Ro’s double-time reminiscing shows the veteran is still lyrically adroit.

On album opener “Hogg Life,” Slim Thug sounds reflective and celebratory at the same time discussing his days of “doin’ donuts on 22s” with “fat pockets.” Of course, the album’s cover features the Houston hard-hitter as an arrested teen in 1996, so at the time of his life that he’s rapping about, the days certainly weren’t that amazing. Or maybe they were, the idea that currently living freely in roughly the same manner that he once did as a criminal feels like some sort of epic victory against a socio-political system set up to see him (and those like him) fail. Maybe living the life of a “Boss Hogg” hustler is all about finding underground independence to live according to your own code. Idyllic in feel and often well-delivered, this album may not be a cohesive listen, but it is noteworthy. Serving as a testament to the subject’s excellence and longevity (released with his own money and on his own label), Slim Thug opens the door to a celebration of his career, offers you a double cup, and gives you a chance to relax with a legend.