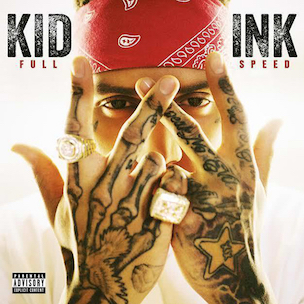 Its origins are steeped in club crazed ignition fluid, but not much respect is paid to Hip Hop that glosses over lyricism. Whether consciously or not, most listeners tend to categorize “mainstream” artists as manipulative, mediocre talents out to come up. But the absence of witty bars does not always translate into the absence of quality, necessarily. Since his formal debut with 2012’s Up & Away, Kid Ink has created music that allows the backpack-minded to loosen those straps. But the majority of his latest release, Full Speed, lends credence to those stereotypes we stated previously, unlike his past efforts.

“What It Feels Like” is laced in the same sort of triumphant saxophone found in Drake’s “Trophies,” and it functions temporarily as a mission statement. Draped in the personal storytelling flair of past tracks like “More Than A King” and “Hell And Back,” Ink delivers a fervent declaration of his motives. The aura is convincing for a time, especially as his excitation boils over into “Faster.” He appears wholly comfortable working within DJ Dahi’s alternating sonic universe, meshing enunciated, crawling vocals with a bass-heavy instrumental.

But Ink’s enigmatic beginning is derailed by to radio.  Although he has remained steadfast to the mainstream, tracks like “We Just Came To Party” and “Time of Your Life” were differentiated by an intangible, ingenious characteristic that often gets ignored in proverbial Hip-Hop discourse — catchiness. His dependable topics and phrases are fully represented throughout, such as stealing girlfriends and turning them into ex-girlfriends, pouring up, club hopping, and telling women in the second person things they “ain’t gotta do,” but there is a overwhelming we’ve-heard-this-song-before feeling with the bulk of the material that he used to previously sidestep.

In the past, the same synth-heavy production and sing-song, nursery rhyme delivery existed, but here they come across as stale imitations of their predecessors. “Hotel” has all the earmarks for a Top 40 radio smash, complete with a Chris Brown hook, but sounds much too much like “Main Chick” to make much of an impact on fresh ears. On “About Mine” Ink seems content with the star billing on DJ Mustard wax than the actual direction of the song. Trey’s wayward vocals dominate the track and the man of the hour is merely an appendage barely noticeable on the sidelines.

The term “rushed” is one of the seven deadly sins of music criticism, but the undercooked nature of some of the recordings is difficult to deny. On “Cool Back” Ink adopts a whisper flow, and like most tracks of the whisper-flow genre, the monotonous ambiance does not warrant revisiting. The same unimaginative aura pervades “Round Here,” an extended Friday reference that seems like a chore for Ink to get through himself.

But there are the occasional moments where Ink exhibits his past proficiency, making the mishaps all the more visible. The unlikely pairing of Ink and Migos is an exquisite blend of two opposing styles, neither part having to calibrate their creative identities for the greater good of the song as is often the case. Whereas his presence is almost completely overshadowed on “About Mine,” Dej Loaf’s sparse duties on “Be Real” has the opposite effect,f targeting the spotlight on himself and a perfectly kinetic C.P. Dubb instrumental.

It most cases, it’s tweaks and subtle nuances to an artist’s sound that grants them tenure with their audiences. Jay-Z has been talking about money since the 90s and Too $hort has been rapping about ladies since the 80s, but they keep listeners’ attention not by completely severing the part of them that made them successful artists in the first place, but by simultaneously growing creatively and holding on to their identity. Most of the songs on Full Speed are catchy in their own right, but on the heels of tracks that sound so much alike just now seeing their expiration on radio, the feeling is mixed at best.