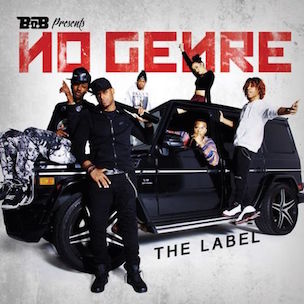 Post-the days of trying to get a tip at Subway, B.o.B. was the lone kid with a guitar, a thick Atlanta accent, and a microphone Hip Hop fans were not sure how to respond to. Not too many artists can collaborate with the likes of Weezer, Taylor Swift, and Paramore and turn around and make a universal club smash. But B.O.B. is different, a fact he constantly reminds his variegated listeners of. But in spite of his daring musical endeavors, the majority of his output shares an overwhelming resemblance with the majority of rappers vying for mainstream fame. Adhering to the same messy principles of genre-bending, B.o.B. has extended the acclaimed No Genre series to his own label, complete with the motley crew of Bobby Ray disciples intent on adhering to the same genre-bending modus operandi their leader has both excelled in and disregarded altogether.

B.o.B.’s career has revolved around undelivered promises juxtaposed with an almost obsessive desire to separate himself from the pandering radio masses. But No Genre: The Label completely envelops itself in the field of taste-maker trends following to an almost staggering degree. All the usual famous-rapper themes are represented in excess. The first track, “Going Up,” grounds itself in the sort of auto-tuned, marbled chorus designed to ignite the party, with not a shred of ingenuity. The follow-up, “Chaos,” revisits all too familiar territory with myriad I-got-plenty-of-hoes talk against the backdrop of a kinetic JaqueBeatz instrumental.

The inherent problem with No Genre: The Label is that the lusterless recording severely hampers the abundance of hot bars buried between the passionless fabric. Jake Lambo in particular capitalizes on every opportunity granted him, but unfortunately the vanilla radio garb provided stifles his ascendance. He is exceptional on “Chaos,” “Wit My Name On It,” and “Tour Bus,” and it’s only a matter of time before the young M.C. is working on his own tracks with Taylor Swift.

Broiling verses from the respective players more than justify their record deals and consequentially their alliance with B.o.B., but the assemblage is rarely able to construct memorable moments together. “YRWAS” blunders as a hype-heavy club jam with a ho-hum chorus reeking of a rehashed, sterile Hip Hop trope. But B.o.B., London Jae, and JaqueBeatz pirouette a raucous instrumental into an expo of sweltering rhymes. Similarly, the humdrum, repetitive chorus of “These Niggas” is rescued in large part to the bars of Jake Lambo.

Other artists unfortunately miss the mark altogether when their moment of reckoning arrives. Lin Z drops the ball on her solo entry, “Damn.” She commences the track with sharp, enunciated bars coupled with a cocky demeanor, but then throws singularity to the wind as she copies the flows of her contemporaries — namely Nicki Minaj’s copyrighted accelerated vocal mutations. Not surprisingly, B.o.B. is the man of the hour, consistently employing his veteran card to flex on tracks like “Jimmy Fallon” and “I Ont Really.” On the latter, he is joined by the equally fiery Scotty ATL, but the monotonous aura of the chorus makes their efforts irrelevant.

In albums past, B.o.B. has enlisted his creativity for good use, repurposing the hits of yesteryear into ingenious cuts that in spite of their origins, are stamped with a golden seal of authenticity. “Swing My Way” from the rapper’s No Genre II mixtape is a prime example, but the sampling on No Genre: The Label misses the mark almost entirely. “Gin and Juice” is difficult to do justice to without Snoop Doggy Dog’s silky rhymes and drums by Dre, but B.o.B. and company miss the mark entirely. Not even Jake Lambo or Lin Z provide anything in the way of redeemable music in this instance, and the track fails to register on any marker.

The various artists sound more in sync when they #turndown in favor of real talk. Whereas a majority of the tracks sound like random artists strewn together, the various rappers are united in their ultimate goal—using their music as a vessel to propel them from their bleak surroundings. “Any Means” is one of the strongest tracks of the album, and the collection of label mates sounds like a united clique with staying power. “In The Air” reaches for the same personable intensity but comes up shy. The majority of No Genre: The Label tracks as a whole are the product of easily forgettable moments despite the sheer number of talented individuals involved.