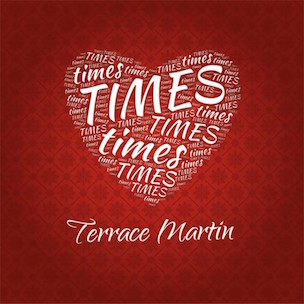 3ChordFold, the album that many perceived as Terrace Martin‘s debut project, was an overall successful display of a complex storyline based upon dynamic, crisp production. Its dependence on vocals as told through the emcee became the antithesis of his next project 3ChordFold Pulse, which saw the narrative and the voice take a secondary position to live instrumentation. Once again, Martin abandons his previous sound for what he has dubbed as his “Christmas-love album,” Times. In this 13-song festivus, the listener finds new elements of Martin to appreciate, and previous elements to miss.

Times is a essentially a mix of jazz instrumentals, R&B, and renditions of Christmas classics. There is little to no evidence of Hip Hop influence. With that being established, the listener will perhaps find the most enjoyment seeing how Martin approaches an album from the window of a very specific theme, which people already have previous notions about.

A good example of how Martin tackles the holidays is his take on “God Rest Ye Merry Gentlemen.” Despite the carol being first published over 150-years ago, the skilled producer modernizes it in his own way. He begins with an airy backdrop, with faint harmonies and a gradual drum. Then, almost a minute into the song, his saxophone becomes the vehicle for familiarity, for comfort. However, what is supposed to be a detailing of Christ’s birth also gains a new sense of sensuality — to be more direct, it is downright sexy.

This feeling is characteristic for much of the album and it becomes clear that Martin wants this to be a project that is incredibly intimate, whether that is between family, friends or a loved one.

“Gumbo Love,” featuring Uncle Chucc is a testament to that. It takes food and once again makes it sensual through it’s use of the organ and subject matter. Chucc sings beautifully on the hook, “I want your gumbo love, baby/ saucy, shrimp and chicken/ Don’t forget about your crab legs…” It becomes an entertaining moment that doesn’t forget the central place food plays in the holidays and thus, it is also has a family feel. Eerily enough–whether Martin intended it or not–the song is also a commentary on the receiving of communion; the Eucharist. By turning the body into food, Chucc is echoing Christ’s noted declaration that the bread and wine ingested during the Last Supper were his actual body and blood.

Ultimately though, it is “All Year,” the first single off the album that features HS87 vocalist Preston Harris, that is perhaps Martin’s greatest contribution to the Christmas song pantheon. Harris, who more than anyone else is the emerging voice of Times, takes on the perspective of a child waiting for gifts. In great detail he paints the atmosphere. He begins, “Aint nothing better when the lights are off/ and all the colors shine through the dark/ Anticipating daybreak, all night.” Incredibly simple, the song consists of little beyond it’s dancing drums, the slowly-emerging horns, and playful piano that peak beautifully in the hook. The song is definitely the most cheerful; the one that kind of embodies that “feeling,” that maybe like Harris hints, finds it’s place when everyone is just a kid.

The song also indicates certain areas where Times is lacking. Of course, it would be foolish to take anything from Terrace’s production skills. Undoubtedly, he is magnificent but the album loses it’s strength under some of that R&B sensuality and it lacks immediacy as well. “Luv Lullaby,” “Drummer Boy” and “Silent Night” make for a long stretch of slow-moving songs that take from the dynamism of the work. Where Hip Hop elements gave 3ChordFold tenacity and live instrumentation gave it’s predecessor an experimental tone, Times is often too comfortable for the novelty of a Christmas album. Not to mention, ruling out a Rap song on the album when he is friends with some of the best may have been a mistake. Christmas Rap songs have been a long withstanding tradition in the genre and as of lately, too few and far in between. “All Year” in all it’s glory and simplicity shines a light on the rest of the album, exposing certain spots that had so much potential.

Still, the album is a beautiful work, a successful addition to his catalogue and definitely something for the season, if not the rest of the year.