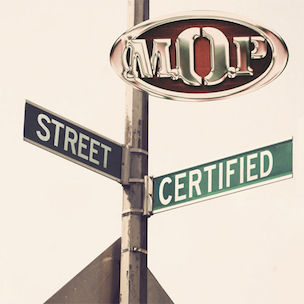 22 years into what has been a solid (sometimes spectacular) Rap career, Lil Fame and Billy Danze (aka Brooklyn’s M.O.P.) are, as advertised in the title of their latest EP, Street Certified. Likely most mainstream-famous for now 14-year old stick-up anthem “Ante Up,” there’s six albums, a ton of hustle and undeniable skill in the story of their rise, which on this aforementioned EP feels as if the level of hustle continues to be high, informing the material with a battle ready energy, even if it appears in rap at-present that the duo have no wars to fight.

It takes M.O.P. less than ten tracks and having no two threats of violence sounding the same to leave rap laying in a pool of blood wondering where its chain went. DJ Premier executive produced this EP, so hard raps by hard dudes over hard beats should be the expectation. WIth a legendary producer helming the project (plus two veterans both producing their own tracks) the canvases upon which their gritty tales are painted come from all angles and meet the classic rap boom-bap expectation.

In the case of single “Welcome 2 Brooklyn,” it’s produced by, of all people, Chaka Khan’s nephew ChuckHeat who also sings the track’s hook. In the case of Busta Rhymes-assisted literal lyrical crime spree “Broad Daylight,” it’s the little know A Fresh behind the boards, with Rotterdam, The Netherlands-based Mr. Probz on the credits for kick-drum led soul-swinger “Hustle.” While many may not know the names of the producers, their style is inimitably New York, which gives the album a unique sense of being a great story of the ubiquitous nature of Hip Hop culture in the present day.

For as much as M.O.P. should be celebrated for their top-notch effort on this album, the guest spots truly shine. Maino drops in on “Welcome 2 Brooklyn,” his party-ready flow still packing a punch, two sides of the same coin finding the balance in a groove. Busta Rhymes gets out of his “Swagger Wagon” long enough to torment the streets with “Broad Daylight,” a track bearing raps that touch on Ebola and Adrian Peterson, Buss-a-Buss proving both righteous and relevant. Mobb Deep joins for the EP’s title track, a song that feels like it should be played at high volumes under cover of blunt smoke at a New York nightclub circa 1994. While not the clear-sounding back and forth rhyme play of rappers-as-hemi-powered muscle cars EP closer “American Muscle,” the title track is definitely appreciated for the sake of the important throwback element being on a “street” record.

However, if looking for “Ante Up” here, it’s not to be found on the track with Busta Rhymes. “Ante Up” works because it’s a manic blast of New York-specific street energy encapsulated in a rap record. The most “New York” record on the album is the Fizzy Womack and DJ Premier-produced “187.” Premier’s on the cut and the sample is of “Head Over Heels” by 80s synth pop stars Tears for Fears, so there’s definitely two decades of Big Apple traditions happening on the same record. When the hook drops of “187 in progress / everybody get it, everybody a target” you know exactly what you’ve signed up for and the duo delivers. It’s as if trap and techno never happened, and crime stories in rap still sounded like they were being told over James Brown samples.

If looking for a release that will re-affirm your love of rap that sounds like from whence rap came, this is an ideal release. Going back to an era before the genre felt as though the wheel-needed reinvention, Street Certified advertises exactly who M.O.P. are, and delivers product that more than meets that expectation. When quality artists make a quality release – while likely not news – it allows for a great listen, which, in this case trumps all else.