Rapsody - Beauty And The Beast (EP) 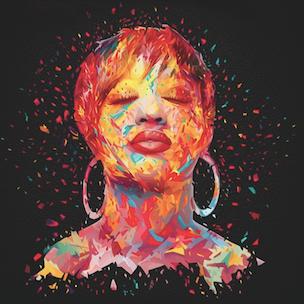 Rapsody’s ten-track, Jamla Records-released Beauty and the Beast EP – with it’s premium on booming soundscapes and honest lyricism similar to Ms. Hill’s 90s era output – makes you feel as though the revolution is booming through your speakers.

A snippet from ‘97s GI Jane starring Demi Moore as an aspiring (and groundbreaking) female Navy Seal program trainee in which Moore’s character Jordan O’Neill tells her commanding officer to “suck my dick” sets the tone for the album. Allowing all of the combined, aggravated feelings of Lauryn, Lyte, and Latifah to rise to the surface.

Eric G., Khrysis, Nottz and Jamla label chief 9th Wonder handle production on the EP, with mixed results. Of the latter, Khrysis’ production on “Drama” feels like Eminem and Luis Resto’s co-production on “Moment of Clarity” in that the production’s bass-heavy and synth-friendly bassline is just as deep as Rapsody’s subject matter. However, the rhymer lacks Jay Z’s unique timbre, and the song just misses the mark.

9th Wonder’s production on “Godzilla” and “Hard to Choose” are crunching and agitated perfection, providing the perfect space for the rhymer to best make her point. Don’t misconstrue, she’s rapping for rapping’s sake here, but the bars are lively and clever. “Michael Jackson, I’m the new thriller / Super cold, get a chin-chilla / You don’t want it? / Well then get a sitta’ / Couldn’t get a ab even with a sit-up…”  It could be seen as too long, but so much of this song features a stunning lyrical display, that, as a listener, you’re fine with it.

“Hard to Choose” is one of the EP’s jewels when she rhymes, “Look in my crowd, the minority’s never white,” stating her rappers-lament and blending the angst of being black and female with sultry production. “I appreciate y’all but I’m lyin’ if it don’t bite…” she continues, raps fading off into the sample’s innocent falsetto “so-so hard to choose.” She proceeds to get rough, here, though, questioning why the world favors one woman (Nicki or Iggy) emcee over another — wherein she hints strongly at overtly sexual lyrics and presentation — with wit. It’s intellectually stimulating material that honestly makes being a black, female rapper attempting to flourish without succumbing to the wants of the male gaze seem like the hardest task in the world.

“Forgive Me” ends the EP rousing upward instead of continuing the pacing of the previous tracks, before breaking down into a piano heavy time change. The BPM fluctuation that’s so in the rage these days allows her to add an extra layer, an earnestness to her flow that you simply don’t find on the other tracks. Sampling the first vocal off Moloko’s 2006 trip-hop/dance number “I Want You”, the Jamla version facelifts the gorgeous Roisin Murphy vocal into a twitty, bass laden mine field of Rapsody’s voice. “All my jams ain’t party hits,” cracks Rap’, “I’m thinking ‘bout moderation/ I’m thinkin’ ‘bout Mike Brown, what my nephew might have to face if/ I don’t talk about it.” Rapsody’s never scared to talk about it, but that’s only one part of what she does so well here.

What’s best about Beauty and the Beast is that it works flawlessly most times, showcasing a synergy that explodes throughout as the gifted emcee’s vocals tuck neatly within productions hand crafted to accentuate her strengths. Add in that, here, she’s so visibly annoyed, saddened, and morally outraged by the current state of affairs in her world, that she flows with a distinct purpose, allowing her own prodigious lyrical ability to shine through. Though, she doesn’t always hit a conceptual groove that pushes a narrative, and hesitates to change up her speaking voice to give context to her verse’s emotion at times. But she excels with a giant helping of her signature high-class lyrical ability over slathering, superlative production.