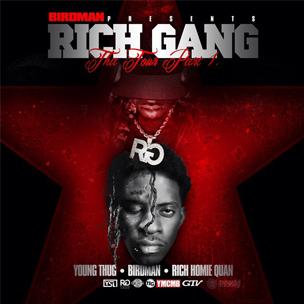 If we’ve learned anything about Birdman it’s that he’s an opportunist. You don’t sustain a sizable empire for as long as he has without being one. His business acumen is second to none, and he is savvy enough to capitalize on even the slightest opening. This brand of industry savoir-faire has served him well in recent months: Upon surveying the Rap landscape, he spotted two gifted, Southern upstarts in two very tricky label situations and began inserting himself into the periphery just as both deals began to sour. He became a mentor to both young men and became a fixture in their respective careers until he had enough cachet to leverage their current deals into an unspoken union. It is by this fortuitous series of events that Birdman was able to bogart his way into the frame surrounding Young Thug and Rich Homie Quan, products of Atlanta’s post-Future weirdo Rap scene, and form a group.

Alas, out of the ashes comes a mixtape born from the whispers of a previously rumored collab between the two emerging rappers Birdman now sires—one that would’ve otherwise been shelved by major label machinations: The Tour, Part 1 bills the three artists as Rich Gang, a moniker that was used just last year to represent the entire Young Money/Cash Money roster, but is now being re-branded as this new entity, and they operate less like a triumvirate and more like a duo overseen by a hands-on manager. It is this level of creative control that makes the tape go; the respective crafts of Thug & RHQ are built on a semi-improvisational, melodic tone and Birdman gives them free reign to explore themselves with minimal interference.

Birdman doesn’t play much of a role in the song making, but it is clear his presence is invaluable to the group’s makeup, and with his backing, Rich Homie Quan and Young Thug have produced some of the most inspired work of their young careers. The two Auto-tune artisans showcase their respective skill sets individually—Thug his unpredictable flow (“Givenchy”, “730”) and Quan his mastery of melody (“Milk Marie,” “Everything I Got”)—in breakout moments, but it is in the moments of pure synergy that they truly flourish. On “Tell Em (Lies)” Quan finds the harmonies as Thug peddles drive-by cunnilingus: “I’ma pull up, eat on that pussy, and dip.” As he sells his brand of romance they both get melismatic. They are strangely mystical in tandem; Young Thug is impulsive, almost volatile, and Rich Homie Quan’s consistency makes for an excellent complement. And, when the two rappers are in sync, their sound is strangely effective.

One thing that can’t be debated, despite the mysticism of nearly all the harmonies and melodies, is the quality of the singing. There’s a lot of straining and squawking that gets masked by Auto-tune, but in some moments it’s piercing. Even with such a crippling handicap, however, the pairing consistently churns out bangers.

It should be noted that Birdman’s two most prominent appearances on the tape—on the snap-driven “Flava” and the brooding “Imma Ride”—are solid contributions; those two songs are The Tour, Part 1’s show pieces, and it’s fitting that they both feature contributions from all three members (and Yung Ralph) filling their respective rolls magnificently. It makes no sense that Rich Gang’s The Tour, Part 1 flourishes as much as it does, particularly under Birdman’s watchful eye and with the Cash Money seal of approval. That, highlighted by a stunning chemistry between the two ATLiens, performs on a platform that feels almost big enough to convince you these guys are Billboard certified stars and not just warbling weirdo Rap staples. This is the opportunist creating opportunity.