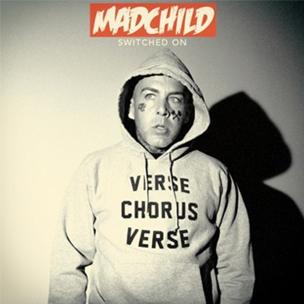 Swollen Members’ first retail project, Balance, is listed with an official release date of 1999. The implication is that both individually and collectively, they’ve created a loyal following over the course of 15 years while still displaying enough diversity to pick up new listeners and change with the times. For the crew’s de facto leader, Madchild, the dichotomy of documenting his ups and downs, satiating the loyal throng of Battleaxe Warriors and progressing as an emcee presents a set of challenges that make for an interesting listen. It’s against this backdrop that he releases his Switched On EP with the challenge of accomplishing all the above goals.

By and large, Madchild has built his discography on elaborate rhyme patterns and whimsical subject matter over brooding production. So it comes as no surprise he starts the album with bars that transition from an insular self-description to a seemingly comic book-styled transition into his rhyming alter ego. On “White Knuckles” he rhymes, “Feeling so alone, watch this orphan come undone / To a shape shifting ape, lifting weights having fun / Acid-spewing speed demon feeding on the weak / I get paid from words, literally eat from what I speak…”

As the byproduct of the boom-bap era, Madchild’s strength is stacked couplets of rhymes about how good he can rhyme. A near-death experience with drugs added a certain palpable depth and more subject matter for him to mine, and one of the best qualities of Switched On is Madchild’s ability to touch on his recovery without it becoming a dominant theme. What the listener ends up with is a nine-track offering featuring the type of references accepted with open arms at Comic Con, extremely relatable fare (the title track features the rare statement that doubles as both a boast and a lament: “Now I owe so much money I don’t open the mail”), and just bar-for-bar rhyming.

In terms of a balanced listen, both a heavier dose of the everyman material and a more diverse production palette would better serve the project. At times, rhyming for the sake of rhyming produces monotonous results such as bars about sending dick pics via iPhone (“Switched On”). The soundscapes aren’t innately bad, but they tend to hover in one mode too long to create enough variety for the casual listener. The formula of foreboding, staggered keyboard patterns over punctuated synths is repeated on “White Knuckles,” “Amadeus,” “Iran” and “Hellbound,” rendering half the album to good but overly familiar territory. Tracks like the vocal sample-powered “Act My Age” and “Tom Cruise,” with its eight-bit blips offer a welcome change. They also seemingly push Madchild out of his comfort zone and into some introspective rhymes—which one doesn’t need to be a Battleaxe Warrior to appreciate.

With Switched On, Madchild is playing to his strengths, but he shines best when taking risks. While it serves as a respectable offering to hold diehard fans over until the arrival of his Superbeast album, one can’t help but wonder what could have been with less reliance on that built-in fanbase and some increased venturing into the great unknown.