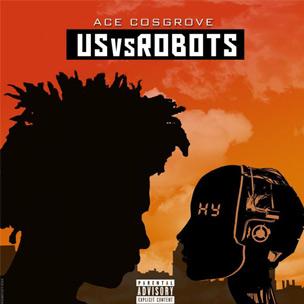 The relationship between a rapper, their style and the production concepts utilized on their project should be a seamless marriage that doesn’t detract from the messages derived from the artist’s words. However, on UsvsRobots, the latest release from Wahington, D.C.’s Ace Cosgrove, modern beats don’t quite mesh with Cosgrove’s timeless flow.

Given that he mentions LeBron James on this album, here’s a simple basketball correlation by which to understand where the creative effort on this project underwhelms. Just because Michael Jordan could dunk from the free throw line doesn’t mean he didn’t score 30 points a night by just masterfully shooting 15-foot jump shots, too. Though not exactly detrimental to the project overall, UsvsRobots insistence on pairing synthesized and “EDM”-trending sounds with Cosgrove’s laid-back, honest and insightful ruminations on love, wealth and getting by in order to get ahead, incorrectly shows the rapper as a just another developing student of an overcrowded game instead of a quickly-establishing master he has become.

Cosgrove’s nasal, high-pitched flow over soulful productions recalls left coast ‘90s legends like Souls of Mischief of the Hieroglyphics crew. There’s a “humble bragging” boastfulness apparent in those ‘90s forefathers present in Cosgrove too—especially in album opener “Golden Chills.” Black Diamond is at the helm of this track as a producer, and a soulful, saxophone-filled production alongside the emcee’s wistful yearning for success and/or a few dollars more sets the table well for UsvsRobots overall.

The dichotomy between Black Diamond’s smooth, percolating and soulful production on second track “Burning Slums” as opposed to rising DC-area tunesmith Royal’s post-dubstep low-end machinations on terrific third track “Damn She’s Right” is jarring to the ear. Maybe using an interlude to conceptually bridge the not-so-interconnected sounds would’ve been ideal here. Ace Cosgrove is a storyteller who is truly adept at his craft. Possibly having some moments of levity in a very sobering life-as-landscape painted by Cosgrove would have allowed for the production’s energies to comfortably diverge.

Dancefloor ready Rap tracks on this project enter some familiar creative spaces, if not on purpose than almost by bizarre accident. On “Red Eyes,” Cosgrove sounds like boastful and spastic UK rapper Dizzee Rascal, while on two-step meets Jersey club i.V. production “Getting Loot,” he’s a mimic of Tinie Tempah’s jiggy bespoke style. Finally, on “Making Moves,” there’s the tell-tale feel of funky, Afro-house driven, Mark Ronson mixtape-era Wale. In full, hypebeasts making music for the hipsters feels here like a dated concept that was once important but time has now passed by.

It’s been almost a decade since artists like Wale, Kid Cudi, Kanye West and others bridged the gap between boom-bap and breakbeat-driven presentations of Rap music and once again driving Rap into potential dance floor discomfort. As with all things ultimately pop-driven, there’s a limit to just how long a gimmick remains fresh, viable and filled with intrigue. Similar to the aforementioned emcees, D.C.’s Ace Cosgrove is a humble beta-male storyteller with game-changing and alpha-male motivations. On UsvsRobots, Cosgrove shows himself to be as vivid and creative of a storyteller as the project’s beat selection is oftentimes progressive and expansive of Rap’s old school traditions. However, in a case of “less is more,” Cosgrove remaining creative, but in a space that lets him fill old-style tracks with an updated energy, he’s likely to find his greatest comfort as an artist, but also his greatest commercial success, too.