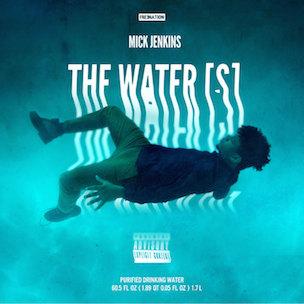 Much has changed for Mick Jenkins over the last six months. Jenkins, the preacher ever cognizant of over-preaching, signed to Cinematic Music Group, shared a stage with Earl Sweatshirt, and earned a half-million views on a music video for the song “Martyrs.” But The Water[s] does exactly what Jenkins said it would. It’s moralistic but avoids a simplistic dualism that separates things into light versus dark. It’s on point with its analysis of the problems permeating our culture but never absolving Jenkins of his own self-doubt. Though sonically accessible through languid beats, concise hooks and Jenkins’ booming baritone, The Water[s] is an incredibly challenging project that requires multiple listens to fully disentangle its ethos. As he raps on “Healer,” which samples Dream Koala’s “We Can’t Be Friends,” the topics range from “her innermost thoughts to all the triflin’ shit on WorldStar,” and the messages on the pluralistic Water[s] can be purposed for everything from the crisis in Ferguson, Missouri and the state of mainstream Hip Hop, to a ride on Chicago’s L train.

Jenkins is aware of how trite taking the pulpit feels and The Water[s] is full of lessons, but its lectures are rare and so is the condescension commonly associated with overt righteousness. The tape’s title track finds Jenkins admonishing those that weigh gold over lives, but it begins with a sober acknowledgement that the bank is declining his card. The two verses on “Vibe” discusses the consequences of a lost perspective, but not without Jenkins admitting that he was too caught up in his career to visit his dying grandmother. On the Statik Selektah-produced “Black Sheep,” he interrupts a celebration of what makes him stand out from the herd to remember when he wished for his friends’ parents instead of his own.

The Water[s] finds Jenkins reaching many boiling points, several of which occur over the fluid and airy strings of “Drink More Water.” Some are delivered with restraint (“irritate the white skin like a blackhead”), others with feverish urgency: “Have everyone panicking / Like when Danica Patrick got good with the handling / Dismantling the plans of the industry management / Nigga might’ve said too much, ain’t we supposed to still be slaves / Nigga might’ve read too much / Saw a rape taking place in my face in the hood / On some Drake shit, nigga might’ve cared too much.” The dour “514” has him toeing the line between indignation and hopelessness, often in the same bars: “Serve and protect, like protect your pockets and servin’ subpoenas / Whole shit a circus and they ain’t even servin’ us peanuts / I learned this back when they was servin’ us free lunch / System ‘bout as foul as a free throw / Tell me what the fuck a nigga know about a free thought / If everything that he thought stem from a remote,” he raps on the track’s first verse.

The project’s zenith comes on “Martyrs,” which flips Billie Holiday’s “Strange Fruit” into a lament on senseless killing. Jenkins hangs himself in the visual, but comes back brazenly snarling with Cinematic labelmate Joey Bada$$ on the finale, “Jerome.” It’s liberating but not exactly celebratory; Jenkins raps chest out and demands to see hands in the air—more threat than formality—while Bada$$’s stellar finish adopts a dingy growl reminiscent of Osirus in ‘95.

That’s not to say that The Water[s] is all hard times. The project is dominated by sumptuous samples and beats that crash and ripple over Jenkins’ low tone. The elusive NoName Gypsy drops a guest verse of charismatic non-sequiturs on the upbeat “Get Comfortable,” and The Mind (of Chicago production team THEMpeople) delivers impassioned, woozy hooks on “Shipwrecked” and “Dehydrated.” “Vibe,” arguably the project’s best song, is as much a mature smoker’s anthem as it is a meditation session. And though his flows come off facetious, the hook on “Martyrs” doubles over tropes we often see in Hip Hop and seeks to expose their shallowness.

The Water[s] is one of the most accomplished releases out of Chicago this year, but it’s not sensitive to time or location. Rather, the 23-year-old Jenkins raps about longstanding issues that are both institutional and individual. He’s keen to point out the bullshit that clouds our day-to-day, but more importantly, he readily admits when the solutions can’t be found.