Slaine - The King Of Everything Else 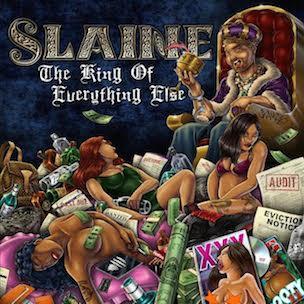 The constant fragmentation of Hip Hop means there are more artists than ever attempting to delve into the darker recesses of the genre. Be it facing up to inner demons or touching on taboo topics like suicide and abortion, these are curiously dismaying days for emcees and their art. Problem is, there are only a few Hip Hop artists that do it well and entertainingly on a consistent basis. Boston veteran emcee Slaine of the group La Coka Nostra and Suburban Noize Records makes a potent case for being counted among the best at it on King Of Everything Else, where allows fans to enter the most dreary, yet lyrically intense corners of his mind.

What allows Slaine to succeed on King Of Everything Else is his candor and believability as the fractured but loveable anti-hero: he has no qualms about being the proverbial bad guy through his messy truthfulness and by being harsh, sadistic and not the least bit politically correct. Lyrically, listeners aren’t likely to find songs that are more happily bitter and sardonic than “Destroy Everything.” Though the second song on the LP, it sets the rest of the album on its path more effectively than its predecessor, “No Handouts.” “Bobby Be Real” featuring Tech N9ne and Madchild is the first standout track from the project with its unusually rousing big band, up-tempo sound and creepy but beguiling wordplay between the three emcees.

And “Hip Hop Dummy” is one of the darker but enjoyable songs featuring Apathy and Bishop Lamont. It brashly stomps in and pounds in the listeners’ ears with an unrelenting attitude. Slaine doesn’t merely wear the mask of or simply act like an emcee you love to hate. He reveres and revels the role, mainly because he realizes that throughout most of this project, he’s lyrically engaging, cleverly entertaining, or just plain on point.

Though King of Everything Else stands solid as a complete body of work, its reliance on shock value and clever gloominess slowly gets exhaustive over an hour. There’s not much room for inventiveness or expanding beyond certain boundaries or subject matters, which causes the project to suffer and stagger in spots. Honestly, listeners can’t expect Slaine to toss out tales of positive redemption and triumph to counterbalance the sense of despair the album conveys, at least some signs of hope might be nice.

But truthfully, that’s not what Slaine is about. He’s an artist that’s about owning up to the darkness and the grime. And on King Of Everything Else, Slaine is disturbing, dismissive, drenched in sarcasm, darkly vivid and almost happy and reveling in being biting, critical, piercing and malicious. And overall, this album proves that he’s damn good at it.