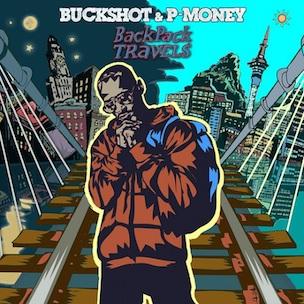 When it comes to career longevity in Hip Hop, Brooklyn’s Buckshot might not always be one of the first names to come to mind, and that’s a shame. The truth is, beginning with Boot Camp Click and continuing on with his solo career beginning with 1999’s The BDI Thug, Buckshot created a surprisingly consistent catalog within underground Hip Hop. After a critically acclaimed run of duo albums with 9th Wonder, Buckshot continues the trend alongside producer P-Money with Backpack Travels. With the knowledge and self awareness that he’s best when sticking to his respective Rap lane, Buckshot delivers exactly what he’s known for: raw, candid Hip Hop, but with a more matured, reflective tone.

The proceedings are kicked off with “Just Begun,” a groove-heavy, old school sampled record that finds Buckshot as relaxed and focused as ever. Throughout Backpack Travels, Buckshot seems extremely contemplative on a myriad of subjects: his past, his career and his borough, just to name a few. But he balances it out with a gruffness and confidence to his rhymes that have become a staple of his work. Buckshot is pure Brooklyn, and Backpack Travels genuinely reflects the traditionally straightforward stylings of Brooklyn Hip Hop lore.

His seamless flow drips into the grimy but quietly confident “Flute” with Pro Era’s Joey Bada$$ and CJ Fly assisting Buckshot, which make the beginnings of Backpack Travels hard to resist. Both tracks, along with the Golden Era-inspired “Red Alert” and the ode-to-the-hood-flavored “Sweetest Thing” are proof that Buckshot has mastered staying true to his formula of realistic Rap, concrete laden production and classic Northeast Hip Hop subject matter.

But the real centerpiece of Backpack Travels, with no disrespect to the emcee, is the spot on production from P-Money. On each song, Money pristinely encapsulates the exact music that Buckshot and Duck Down Records have been making since the early ‘90s: aggressive, throbbing, detailed and specific in sample choices and instrumentation, but also tight, consistent, detailed and clearly unfazed by trends in present day Hip Hop. A song that incorporates all of those elements in to one is “Killuminati,” a clever direct shot at the endless Illuminati rumor mill that pervades Hip Hop’s fringes. And those same elements are heard throughout the project’s best tracks, highlighted by the aforementioned “Flute” and “Killuminati” as well as “The Choice” and “Clear Light”.

With that being the case, the gift of Backpack Travels hindrance to stray from a signature sound is also its foil. Buckshot’s latest wins because of its simplicity and purity, but it is held back by being from the Duck Down alum. And while it’s a decent body of work with more than enough top-notch tracks, Backpack Travels isn’t enough of an evolution from his previous work to be considered a standout album by the Brooklyn emcee.

But although it isn’t a substantial step forward by any stretch of the imagination, Backpack Travels does make for a commendably solid listen thanks to a duo in Buckshot and P-Money that clearly knew what they wanted to accomplish before heading into the studio: to create a thoughtful, unprocessed body of songs that mesh well together into a head-nodding, unfettered symbol of  New York Hip Hop’s Golden Age.