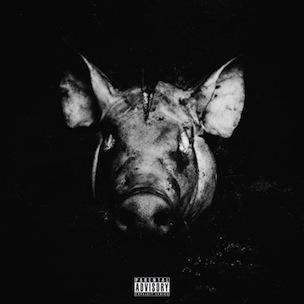 Fair or not, the story of Slaughterhouse will likely be one of expectations. From Joe Budden’s initial Top 40 success, Crooked I’s infusion of talent into a crumbling Death Row dynasty and Royce Da 5’9 and Joell Ortiz’s Aftermath/Shady affiliations, each member has been burdened by the assumption of cashing in on a combination of both raw talent and mainstream appeal. Cementing a 2011 partnership with Eminem’s rebooted Shady imprint (and the backing of Interscope) hasn’t exactly tempered such expectations, and it’s hard to shake the feeling everyone was paying more attention to the 52,000 units of Welcome To: Our House the quartet sold during their first week of release than their actual rhymes.

Slaughterhouse ditched the barcode and shirked the duty of attempting to appeal to the terrestrial radio crowd by releasing the 10-track mixtape House Rules via DatPiff.com. The result is a more concise, cohesive effort showcasing the attributes that initially made a group album headlined by Royce, Budden, Ortiz and Crooked so appealing. Whereas previous songs sometimes came across as a fan referendum on which member could consistently meet or exceed their solo body of work, House Rules is both entertaining and brutally honest in its self-awareness. Joell describes himself as a “rough New Yorker fuckin’ bitches that only listen to Drake,” and Royce jokes about how their intro is “about nothing.” It’s arguably one the most candid Slaughterhouse moments finding the foursome coming to terms with their standing as survivors of a bygone era where punchline-laden raps about how well you rapped were the rule and not the exception. The fact they’ve evolved past rapping for the sake of rapping is on full display, with Budden, Royce and Crooked I taking solo turns on “Trade It All,” “Keep It 100” and “Struggle.”

Each member’s respective style still seemingly plays better against anthemic tracks, with the 8 Bars and Dark Knight-produced “Trade It All” being one of the few exceptions. Joe is in full Mood Muzik mode, with Emanny sounding shoehorned into a ballad. It’s not a bad song, but somewhat of a curious choice given the contrast in styles. It’s a testament to just how far each member, particularly Budden, has grown as a songwriter.

Elsewhere, the guys are tackling sobriety and family matters, with Budden speaking on an ailing grandfather and the tension stemming from everyone—including his entire listening audience—knowing the inevitable outcome on “SayDatThen.” Crooked I effectively mixes his trademark plays on words (“I’m Dominick Whitcliffe, I’m James’ son / Even though he wore a condom, I busted through / And I can’t forget where I came from…”) with a disapproving summary of Rap in 2014 and some shots at V. Stiviano for good measure.

At this point, hearing Royce Da 5’9, Crooked I, Joe Budden and Joell Ortiz successfully play to their strengths without being forced on a song with Skylar Grey isn’t surprising. So House Rules is the audio equivalent of the Jeopardy! answer clue to a series of unknown questions. Is the industry in a place where it matters that these guys can still rap their asses off? Will they be given the creative control to do so, or will the nature of their Shady partnership mean attempting to employ their considerable skills in the service of trying to make a hit? Until the next retail album, the questions and expectations still remain unanswered. In the meantime, fans can enjoy a damn good mixtape.

This review has been corrected to reflect the song “Trade It All” features Emanny. A previous version credited Ne-Yo as the featured artist.