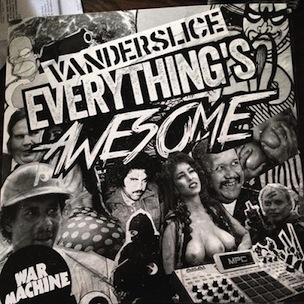 Renowned crate digger and hardcore enthusiast Vanderslice has been swimming upstream in Rap’s Digital Era for years now. With his cohort Stu Bangas, he released the well received Diggaz With Attitude in 2012. Showcasing some of most talented—and morbid—of the underground, the album was a dense, 17-track project that built on the duo’s substantial work in the lost art of searching for samples before Google. Returning to the scene sans Stu Bangas and with more clout to his name, Vanderslice presents Everything’s Awesome. Running for 20 songs this time, the project is spacious and gradual while still keeping its edge.

Out of the 20 tracks, approximately 12 are instrumentals. Each song with a featured emcee is spaced out between these beats to provide continuity (and showcase Vanderslice’s diversity), so the album proceeds in movements. There is a great juxtaposition between songs and within them as a result of Vanderslice’s skillful execution—he couples smooth sounds with ones that are daring. The result is an overall project that runs from heightened tension to come-downs, comedic relief, and back to tense moments that always threaten to boil over before abating.

The obvious stand out track is an impeccable verse by Freddie Gibbs who pulls no punches on “Bugatti Bullet Holes” with the following:

“Labeled a menace nigga / Bitch beaters, I’ll send you pussies to the dentist nigga / Orthodontist to barber college / I give these niggas fades, straight tapers and chili bowls / He woke up in a brand new Bugatti with bullet holes…” Gibbs is on point with his imagery and runs head first into the drama, calling out his former business partner, Young Jeezy by rhyming, “Fightin’ for his life, head rushin’ and blood gushin’/ Shake somethin’, niggas corporate but ain’t thuggin’.”

Vanderslice’s overall choice in emcees to feature is keen, given their respective diversity and overall skill sets. While most of them, such as Apathy, Twin Gambino and most notably, Celph Titled on “Shots Fired,” feature an element of hardcore, boom bap inspired Hip Hop, Everything’s Awesome actually keeps its cool and features an array of great punchlines. On “Bottom Line,” Merkules calls out Drake, calling him a “cop out” and Apathy gets extra gritty saying, “Fuck music sucker, dare me to do it / I slice a hole in your stomach and dive head first through it.”

Vanderslice’s project is solid and well thought-out. Without compromising his affinity for hardcore, bare bones emceeing to match his production, the space he provides in the album allows for digestion which can open up room for new audiences. Instrumentals like “Top Shelf Pussy,” “Phoenixville Nights” as well as the even-paced Evidence on “Everything’s Awesome,” provide composure and depth. The “Digga With Attitude” seems to understand that attitude has many faces.