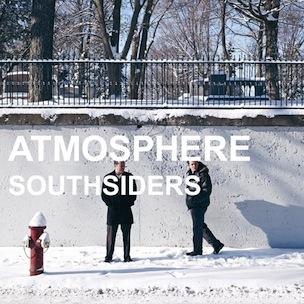 “I highly doubt that y’all think about sex / Anywhere near as often as I think about death.” This opening verse from the song “Fortunate” is epitomical Atmosphere. Their new release, Southsiders, is the Minneapolis duo’s eighth studio LP, and according to an accompanying press release, a ”shout-out to their native neighborhood.” References to friends and loved ones are commonplace, and the content is often personal. Ant continues to experiment with live-instrumentation, which began on their last release, 2011’s The Family Sign. And Slug is still Slug—frequenting the thought-provoking rhyme schemes he’s mastered over the years.

A concept album of sorts, Southsiders contains recurring samples of a train car making stops along its southside root, most likely in Minneapolis. These interludes enable for the listener to experience riding public transit while under the guise of Slug himself: philosophizing about life’s struggles with each stop along the way.

Slug has always been partial to the introspective lyrics. He often internalizes his thoughts, but this time around he increasingly speaks directly to his subjects. On “Arthur’s Song” he postulates, “Stick with the fool like shit to the wool / Gotta get some tools to try to fix these jewels / ‘Cause we don’t need to hear you sing / About how you spent your time as king, being mad at everything / And even when we haven’t seen the sun for days / I keep squinting like it’s shining right up in my face / Everyone’s a critic of the minutes I waste / Got me waiting in a line, got me running in place.” This beautiful sequence is a stream of consciousness, as he fades out of straight talk with a friend, into more powerful self-introversion. If history has taught us anything, it’s that Slug is a master orator with an innate ability to never mince his words.

That very ability to articulate, however, is not without its flaws. For all of the great moments on Southsiders, there are times where a seeming lack of interest, effort, or a combination of the two are noticeable. In particular, “The World Might End Tonight” and “We Ain’t Gonna Die Today” showcase Slug speaking deliberately, but maybe too simply, and the beats lack the necessary zing. In these instances, the tracks come across more as filler material than anything else. The sharp contrast between these songs and the more lyrically top-notch ones (“Fortunate,” “January on Lake Street”) is frustrating for fans seeking cohesiveness.

Lyrical mishaps notwithstanding, the production on Southsiders may very well represent some of Ant’s best work. He utilizes an array of samples and live instruments to elevate standard Hip Hop beat-making into something creatively his own. He hits all ends of the spectrum, with Blues piano (“Arthur’s Song”), bumping drums and synths (“Bitter”) and awesome sample-based beats (“Mrs. Interpret”). On “Mrs. Interpret,” he intertwines a light piano melody with an endearing female French vocal hook. More often than not, if the lyrics are lagging, Ant keeps the track on par.

Southsiders is a solid album. The production is consistent and there are moments of enlightenment from Slug. But due to Atmosphere’s already extensive catalog, it doesn’t easily separate itself from previous works. That’s not to say it pales in comparison. Rather, it is a unique effort and another notable notch in the group’s belt. The positives outweigh the negatives in most every regard. Ultimately, it will be up to the fans to decide where Southsiders ranks within Atmosphere’s album pecking order.