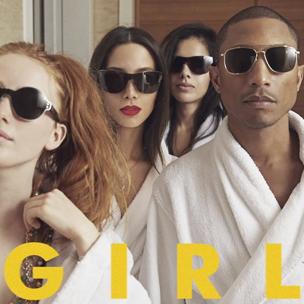 There was Pharrell Williams—and his hat—at the Oscars this past Sunday. He danced with Best Supporting Actress Lupita Nyong’o and made Meryl Streep shake her shoulders. He got Amy Adams to body roll. The performance was the latest in Pharrell’s current wave of transcendent moves: At the Grammys in February, Pharrell basically lived on the stage, accepting awards for Daft Punk and performing with the legendary Stevie Wonder. Near the end of the show, even Smokey Robinson seemed awe-struck by the sleek Virginia native. Pharrell is winning at life, in case you hadn’t noticed.

It’s all part of his evolution. As a member of N*E*R*D with Chad Hugo and Shay Haley, Pharrell was a hipster before it became cool. He was the dude with fitted clothing and skateboards, with Vans and tattoos to spare. In recent years though, Pharrell has cleaned up his image and sound, dropping the rock and covering up the ink. He made a bunch of songs for a kids movie and got married. That explains G  I  R  L’s buttoned-up approach. This past year, Pharrell became the undisputed king of summer by producing, appearing, or starring on glossy pop hits like Robin Thicke’s “Blurred Lines,” Daft Punk’s “Up All Night,” or his own “Happy,” and its innovative 24-hour video.

But while these songs are infectious, they’re also very safe, barely scratching the surface of anything deep, personal or revealing. Such is the case with Pharrell’s G  I  R  L, a clean collection of straight-ahead dance tunes focused on different aspects of feminine vigor. It’s an ode to women that contains the same feel-good energy of Pharrell’s previous work, yet these edges are polished with bright mixes and ornate instrumentation, a sound he’s honed since 2011. “When you listen to music of the old, you hear the musicianship and the musicality,” Pharrell recently told HipHopDX. “You would hear the humanity in it, and that made it interesting. I was like, ‘Man, I just want to sort of fuse some of those things together.’” As a result, G  I  R  L scans as Pop, with just enough soul beneath the album’s smooth surface.

However, there isn’t much happening lyrically. From “Marilyn Monroe” to “Gush,” it’s clear that Pharrell wants you to move and nothing else. On “Hunter,” he borrows Debbie Harry’s stilted rhyme flow and almost gets away with this cheesy line: “Taxidermy is on my walls / With the full description of the killing ‘cause I’m a hunter.” It looks even cornier written out, but again, it’s not about the words here. As a vocalist, Pharrell doesn’t go beyond the same falsetto he’s used since the early-2000s. On “Gust of Wind,” he filters the hook through Daft Punk’s modular synthesizer. G  I  R  L is light fare for the most part, something you play en route to the club or as the soundtrack to your house party. Pharrell is able to get notable features from pop starlet Miley Cyrus (“Come Get It Bae”) and R&B singer Alicia Keys (“Know Who You Are”), both of whom sound comfortable atop his sound. On “Brand New,” Pharrell and Justin Timberlake continue a seemingly lifelong obsession with Michael Jackson: Did they really take Mike’s adlibs from “Don’t Stop ‘Til You Get Enough?” Is that a little Jackson 5 on the bridge? But it’s on “Lost Queen,” G I R L’s impressive two-part centerpiece, where Pharrell truly shines. As the song’s first half concludes, we hear waves crashing along a shore. Then the musician returns with a laid-back addendum, which is easily G  I  R  L’s best moment.

So while G  I  R  L is too surface-level at times, it hits the target it’s aimed for. Pharrell wants summertime airplay, and any of these songs could survive on the radio. It’s also a nice tribute to feminine vigor, adding another notch to Pharrell’s ever-growing list of achievements. He has plenty to be happy about these days.