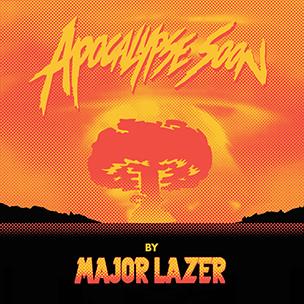 If 20 years makes for a generation, then the plausibility of Major Lazer—Mad Decent head honcho Diplo’s reggae and dancehall-themed EDM project—representing some of the most uniquely pop-friendly Rap music progressions in recent memory makes sense. Hot on the heels of the successful 2013 album Free The Universe, the new EP continues the five-year success of Major Lazer representing pop’s most ear-worming disruption from the Hip Hop fringe. The year 1994 wasn’t just the year when Nas and Biggie signaled sea change in Rap music; 1994 was as much about that as it was too about Jamaican emcees like Chaka Demus and Pliers (“Murder She Wrote”) and Patra (“Worker Man”) continuing the mid-90s run of hits from artists also including Shabba Ranks, Super Cat and others, too. Thus, the idea that these types of tracks (that have a history of doing well in the pop charts) mixing with Hip Hop culture and EDM running neck and neck for control of the pop cultural zeitgeist, could have disruptive potential in mainstream music. All that being said, Apocalypse Soon, Major Lazer’s latest EP release, is a modernized (and very listenable) journey to the heart of a very old and beloved “ting.”

You’re likely freaking out over these tracks because one of them is the minimalist, percussion driven “Aerosol Can,” featuring the “Happy” and adored Pharrell Williams spitting bars like its 2008. Lyrically, Skateboard P is on point here. The track bubbles along, and Pharrell’s apparent perpetual youthfulness is showcased in style and verse. Rap music is timeless (and so is Pharrell), and if the track teaches us anything, it’s that we’ve reached a point in the genre where we need to respect the genre’s ever-present party music impulses and really let Hip Hop and EDM culture commingle. Ultimately, Hip Hop culture is currently ubiquitous, thus making rap fit pretty much everywhere. Standing in the way of that progression is as useless and painful as staring directly into the sun.

The throwback vibe that dominates this EP begins in earnest with with the Sean Paul feature “Come On To Me.” Foremost, in sampling Willie Colon’s Fania Records classic “La Murga,” (arguably, built around a tempestuous trumpet and heavy groove, it’s one of the hardest salsa songs ever), there’s an infectious g-funk swagger in the slowed and reggaeton-inspired moombahton sway. Though far from the maddening American mainstream crowd of late, Sean Paul remains an artist whose unique flow and cadence has allowed him a very successful global career. Similar to successfully working with Shaggy on 2013 album Free The Universe’s “Keep Cool,” it’s in blending an awareness of ironic kitsch for the domestic American market with an awareness of the still-apparent talent and value of certain throwback performers that allows Major Lazer to disrupt pop music, while yet still achieving success.

“Sound Bang” and “Dale Asi” may be two of the most intriguing pop productions in the Rap realm to reach American ears in quite some time. Kicking off like something from the Jason Mraz school of sappy top-40 ukulele schmaltz, it speeds up and bubbles over itself into Dutch hardstyle and African kuduro-tinged EDM. At present one of those tracks that your girlfriend’s girlfriend who idolizes Cara Delevigne or A Different World era Lisa Bonet jammed to at Coachella, it’s simply put, an indulgent chunk of mindless pop goodness.

As great as reggaeton emcee Mr. Fox is on “Dale Asi,” the trap-meets-dancehall flavor of the song feels less insistent as if it were voiced by say, Young Thug or Rich Homie Quan. Yes, there’s a certain level of authenticity that the Major Lazer project aims to maintain with Jamaican culture. However, Diplo’s the ultimate tastemaker who needs to make these types of collaborations occur, and a true moment of intriguing pop crossover was arguably missed. This is a situation where a mashup or remix feels imminent to fix said flaw.

When the least intriguing track on the EP features toasters RDX and Moska flowing over marching band-styled “Dirty Dutch” house in a manner reminiscent of 2009’s “Pon De Floor,” much can be said. The most important of those statements is that it shows the five-year progression of not just the team of producers that comprise the project as artisans, but the depth and scope of dance’s foray into Rap, and Rap’s foray into pop. When an act features the level of execution that Major Lazer showcases on Apocalypse Soon, it makes the likely forthcoming full synergy of dance, Rap and pop not so much regrettable, but palatable and completely welcomed.