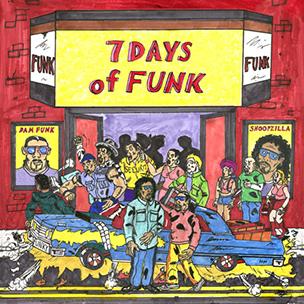 When Clyde Stubblefield first recorded the two-and-a-half minute drum break on James Brown’s “Funky Drummer” in 1969, he couldn’t have had any idea that he’d just laid down a groove that would help shape an entire genre not even in existence yet. To this day, that infectious rhythm along with Brown’s iconic raspy chant, “Ain’t it funky!” awakens a sense of nostalgia (and likely, an unshakeable head nod or foot tap) in Rap producers, emcees, DJs, and b-boys alike. The ‘80s brought a new era of electronic-infused funk, with acts like Zapp & Roger, Slave, and The Gap Band providing the template for the synth-heavy sound of West Coast Rap in the ‘90s, spearheaded by Dr. Dre’s production on The Chronic and Snoop Dogg’s Doggystyle. Though the genre may be on a bit of a hiatus in its traditional form, it’s an indisputable fact that Hip Hop owes its heartbeat to funk.

Twenty years, 11 albums, and two name changes since Doggystyle, Snoop Dogg (now known as Snoopzilla) is the first commercial rapper to release a modern funk album. Though he’s always had a deep love for the funk, many would argue that he hasn’t necessarily paid it the respect it deserves. His funkster pimp alter-ego in the late ‘90s and 2000s seemed like a caricature for the most part; the shiny suits, feathers, and fur he had such an affinity for would lead one to think that the genre didn’t exist outside of Blaxploitation films and Parliament shows. His 2007 Auto-tuned hit “Sexual Eruption”—complete with an ‘80s-style, VHS-quality music video reminiscent of Prince’s “When Doves Cry”—may have been incredibly catchy, but arguably set itself up to be received as satire. Up until 7 Days Of Funk, Snoop’s latest collaborative project between he and Stones Throw’s acclaimed modern funk master Dam Funk, he’s truthfully been most successful in his homage when he’s just being himself.

Dam is Funk without the frills, and he’s undoubtedly guiding Snoop on the path to enlightened funk. His fresh synths and keytar riffs provide the perfect backdrop for Snoop to exercise his right to groove. It’s a return to that groove so loved on Doggystyle, but he’s left the Dogg back in ‘93. Both singing and rapping, his verses are low-rider laid-back and positive without being preachy. His hood pass is obviously still intact (word to Dam), but he’s got no need to wear it on his sleeve. On the hard-hitting opener “Hit Da Pavement,” he light-heartedly asserts his stature while encouraging a hustler’s lifestyle: “I live with a maid / I won’t be happy ‘til my whole team paid / From my mama to my daddy, to my kids, to my wife / And all my kinfolks in the afterlife…” Appearing fresh off of “Higher,” his own full-length collaboration album with Dam, legendary Slave frontman Steve Arrington lends his unmistakable crooning to “1Question?,” and Snoop’s harmonizing results in a surprisingly smooth lovers’ lament.

In fact, 7 Days Of Funk is oddly romantic—much more so than one would expect from an ordinary Snoop project. But this isn’t an ordinary Snoop project, largely due to Dam’s stellar production and song arrangement. Their musical chemistry is exceptional, with their mutual love of “the funk” being the bond. “You may think I’ve had enough, but it’s a must I find my way back to the funk…” Snoop raps on “I’ll Be There 4U.” Appearances from Kurupt and Tha Dogg Pound add just the right amount of G to the funk and help to compensate for Snoop’s overall lack of rapping on the album.

Though some may be discouraged that his rapping isn’t the highlight here, this is a literal and figurative passion project for Snoopzilla, and everything about him on this album feels sincere. In addition to being Dam Funk’s best production work to date, 7 Days Of Funk is Snoop’s most enjoyable album in years. Only time will tell, but they’ve perhaps opened the floodgates to allow for a new era of funk to flow in.