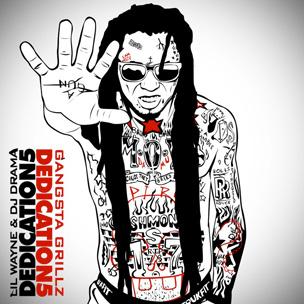 In the “How Dedicated” intro to Dedication 5, Lil Wayne said that the Dedication mixtape series has meant the same thing that it always has, but many of the Rap legend’s devotees would disagree. In the first two DJ Drama-helmed projects from 2005 and 2006, a hungry Weezy revolutionized the mixtape game and took his strongest strides into superstardom before beginning his reign as the biggest rapper in the world. But the last two installments exemplify fans’ problem with Wayne since then: an assumed complacency with his fame.

Less than two weeks before D5’s release, Wayne tweeted an apology to his fans for not being nominated for any Video Music Awards or BET Awards, with a promise to work harder “if it kills (him).” On the fifth volume of The Dedication, Wayne shows the competitiveness that fueled his ascension, and the bad habits that took him down a few notches.

On glimpses throughout the tape, Wayne revisits what made the original Dedication series so effective: album quality original songs and creative reinventions of radio hits, showcasing his jazz-tinged delivery and wit. The highlights here easily outdo Dedication 3 and Dedication 4. He lends a variety of flows to Kendrick Lamar’s “Bitch Don’t Kill My Vibe” on “Don’t Kill,” and he fearlessly attacks Wu-Tang Clan’s “C.R.E.A.M.” to deliver one of his most enjoyable performances of the past few years. Thankfully, the visibility of a Lil Wayne Dedication mixtape is still valuable, so most of the cameos on D5 are done with that in mind. Chicago youngster Chance The Rapper contributes his unique vocals to “You Song,” Vado bodies Meek Mill’s “Levels,” and “America’s Most Wanted” tour mate T.I. delivers a trio of strong 16s to the tape. New Young Money signee Euro also shows promise on several songs.

Still, much of Dedication 5 detracts from the series’ legacy. With a 29-song track list—which may also be a factor in Wayne’s renewed hunger—some of that negative ratio is a matter of volume. On “Started” and “New Slaves,” Wayne is mimicking the original songs’ flows more than tackling them in a new way. Weak lines like, “had a phone in jail, that’s a cell phone” and “I’ll have people looking for you, like a reason” show Wayne’s regression. The highlights are enjoyable, but too many songs fade into the background, making it a chore to find D5’s gems.

Outside of Wayne’s rhymes, Dedication 5 also falls out of line with the Dedication series for other reasons. Many of the industry beats Wayne tackles aren’t the actual beats, but redone versions of them. The approach was likely done to avoid clearance issues, but it makes the tape feel a bit incomplete compared to its predecessors. Plus, despite DJ Drama’s name on the cover, his adlibs and narration are notably minimized. Some fans will enjoy the smaller amount of DJ hosting, but a long-winded project like this could use Drama’s energy—especially considering the legacy of the Dedication series.

To Wayne’s credit, Dedication 5 is the best the series has showcased since its legendary sequel from seven years ago, even if it pales in comparison. Occasionally, the YMCMB head honcho shows that he still has a portion of the skills that earned him his spot among rap’s elite. If he can find recapture the consistency from that same era, he won’t have to apologize to his fans for much longer.

Listen to Dedication 5 by Lil Wayne