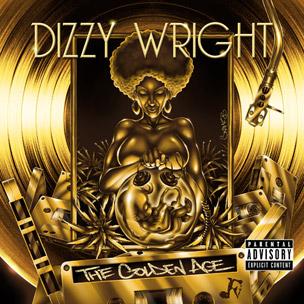 In the last few years, Dizzy Wright has emerged as an unlikely Rap hero for Las Vegas. While the 22-year-old wouldn’t necessarily agree with the aforementioned statement (he avoids the notion of being considered the “face” of Sin City), he’s certainly proved to be a consistent artist with a distinct style that many listeners gravitate toward. With a dime bag of OG Kush in one hand and a pen and pad in the other, Dizzy’s latest mixtape, The Golden Age continues his pursuit for independent dominance.

Dizzy may sport a mellow demeanor in public, but when he’s on the microphone he’s a force to be reckoned with. “The Flavor” is an early candidate for mixtape standout track, where 6ix’s menacing production opens up an opportunity for the emcee to chop down the competition.

“Somebody should’ve told ‘em I was next / The nigga disrespected, I had to hold him by his neck / Sometimes these niggas need to be put in check / See, sometimes these niggas can’t comprehend respect,” Dizzy barks, while his Funk Volume brethren SwizZz continues the fiery formula for a lyrical feast on foes.

Dizzy Wright balances this out with more introspective cuts that detail his growth as an artist, such as “Maintain,” which features Joey Bada$$. Though the title may initially sound corny, not to mention bring reference to Ron Artest, “World Peace” is a smooth track where he drops some words of wisdom (“A major part in life is building the life you want to live with / I know we lack patience, but you got to stay consistent”). Similarly, “Welcome Home” provides an intimate look at the progression he’s made since meeting his father last year for the first time. Realizing his potential, he raps, “Words of wisdom I ain’t rapping the same / This shit tatted on my skin, yeah that’s the shit he had on his brain / So now you battle with change, they rattle your name / 20 years is too long to be acting the same.” Twenty years his senior, Dizzy grabs Wyclef Jean for the Reggae-rap inspired “We Turned Out Alright,” where the two churn out a remarkable record despite the generational gap.

Dizzy Wright does his best to keep listeners engaged throughout a project that spans 22 tracks, but like a compelling movie that goes a bit too long, there’s inevitably going to be some filler. “The Golden Ghetto” reverts to similar themes that Dizzy has touched on before, while tracks like “Can’t Stop Won’t Stop” and “Step Yo Game Up” stylistically come off as interchangeable. “Brodee Bro” seems like an innocent enough record, where Dizzy waxes on about his desire to keep a clingy girl at arm’s length to allow some downtime with the crew. However, in between a lackluster verse from Capo and repetitively jarring production that wears on the listener, it becomes difficult to enjoy.

Despite its setbacks, The Golden Age manages to be a solid offering from Dizzy Wright. Considering the fact that he’s released four projects in the last two years, with another expected by years’ end in The Second Agreement, it’s admirable to see a young artist continue to build without breaking stride.

Listen to The Golden Age by Dizzy Wright