Rapsody - She Got Game (Mixtape Review) 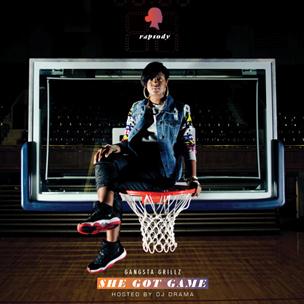 During her steady ascent for the past three-to-five years, a good portion of Rapsody’s successes have been given qualifiers. These backhanded compliments often come in the following forms: “She’s one of the best emerging female emcees,” or “Under the tutelage of 9th Wonder,” etcetera, etcetera, etcetera. Such talk should end with She Got Game, as Rapsody makes her case as an undeniably talented emcee regardless of her lack of Y-chromosomes. While Rap is joined by a who’s who of burgeoning and established artists, she goes bar-for-bar with the likes of Ab-Soul, Chance the Rapper, Raekwon and Phonte.

Strip away the 9th Wonder production and the A-list features, and what’s left is a project powered by Rapsody’s fluid intonation over the various ebbs and flows of She Got Game. Her wordplay is witty, whether she’s musing about Kobe Bryant’s torn Achilles tendon (“Lonely Thoughts”) or just running through the daily minutiae of laundry and washing her hair (“A Song About Nothing”). But Rap’s best weapon is arguably her ability to show aggressive, Golden Era-influenced rhymes don’t have to always stand in binary opposition to heartfelt bars about upward mobility or even love.

As it relates to the latter, male listeners will appreciate Rapsody’s ability to address the subject without resorting to the type of flowery, saccharine rhymes that are usually played from red hatchbacks and smartphones with hot-pink, “Hello Kitty” covers.

On “Feel Like (Love Love)” she rhymes, “I dream about you often / If you only knew the things I think / About your eyes and your smile / The way you wear your jeans / Slightly baggy got me thirsty like the rapper Jean / For your love love / But too bad, it’s just another dream…”

It’s an unfair standard to be held to, given how every male rapper has a free pass to talk about ass and titties ad nauseum, but such is the game we play. In terms of raw bars, Rapsody can pivot on a dime. For proof, see “Dark Knights,” where she flips Batman-related puns such as, “Bane ain’t a match for this emcee / And Dark Knight bat wings need a M3 / All y’all drool for Ra’s al Ghul protégé / I’ve been cold as Jay on 3 Kings nigga get schooled…”

While 9th Wonder provides the backdrop for six of She Got Game’s 16 tracks, the overall soulful vibe is maintained by Khrysis, Eric G. and a scene-stealing offering by E.Jones courtesy of one of 2013’s best vocal chops laid over accompanying keys. Even familiar sample territory such as DeBarge’s “Love Me In A Special Way” has new life breathed into it. And by the time the set concludes with “Jedi Code,” even Phonte comically quips, “You gone fuck all my cruise paper up…all my Jazz Fest paper up.”

The enduring legacy of She Got Game may be that instead of Rapsody landing an all-star supporting cast, each member of said cast stepped up their collective game. Whether it’s Wale deactivating his “LotusFlowerBomb” on “Dark Knights” or Problem waxing philosophical about his children on “Complacent.” Only the participants know if these collaborations are the byproduct of e-mail exchanges or physical trips down to North Carolina, but either way they feel organic.

Rapsody truly holds court, easily wedging herself in the conversation for Mixtape of the Year (although her “Lonely Thoughts” cohort Chance the Rapper will have something to say about that). Suffice it to say, the only thing missing from She Got Game is a barcode. The fact that such quality material arrives in the form of a free mixtape means we can thank her now.

Listen to She Got Game by Rapsody