No Malice - Hear Ye Him 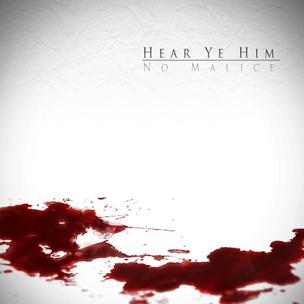 The curious thing about the relationship between Hip Hop and Christianity is that both cultures are simultaneously at odds with one another and constantly interwoven. So when No Malice started to take his music into a more deity-fearing direction, it wasn’t such a huge bombshell, since he and Pusha T had flirted with religious subject matter on all three previous Clipse albums. But having seemingly moved beyond the role of street hustling griot, the veteran Virginia emcee is now dredging fully into God-centered Hip Hop with Hear Ye Him.

No Malice’s proper debut solo album is filled with victorious drums and horns, messages of positivity and repentance, intelligent lyricism and a more mature, salvation-seeking outlook. On the pulsating, passionate title track when he rhymes, “My older brother was my hero till he started dope / Wish I could’ve stopped his very first line of coke…”, it’s not a farce. Similarly on the weighty, stomping percussions and haunting background vocals of “Smoke & Mirrors,” No Malice paints the picture of a man and emcee that’s evolved beyond what he used to be without fully sacrificing his core as an artist. And though the subject matter in his rhymes has grown past drug-fueled stories of the block, fast money and the dope boy Rap life, No Malice makes certain to convey little distinction between his cocaine-riddled past and his more righteous present.

That propensity is clearest on the Pusha T-assisted “Shame The Devil.” Especially on songs like this one, the title track, “Bow Down No Mo’” and “Still Got Love,” No Malice excels at creating a sense of natural, human contradiction, regret and the constant hunt for spiritual retribution. As No Malice and Pusha vigorously throw bars back and forth on the last verse over the patois-laden police sirens and chilling, neck hair-raising drums, pianos and bass line of “Shame The Devil,” die-hard fans will immediately be transported back to some of the best memories of the Hip Hop they fell in love with upon first hearing Lord Willin’ and the We Got It For Cheap mixtape series. While Pusha gives another stellar performance lyrically, it’s really No Malice’s show, as he spits like the emcee we came to know through Clipse, while simultaneously transcending to new heights of honesty and sincere duality in his music.

No Malice’s choices in producers and beats also lend to this sense of earnestness. There’s a certain unwavering, organic quality to the beat creation on Hear Ye Him that surprisingly allows No Malice to sound more at ease and confident than he’s been in the past. Although the production isn’t as hard-hitting and memorable as past material famously created by The Neptunes featuring No Malice, the sonic selections by Chad Hugo, Profound Sounds, S1 and Illmind create a suite that’s ardent and powerful in its own right and palpable for die-hard Clipse supporters and newcomers alike. It serves as both a proper introduction to No Malice the solo artist and as an accurate blueprint to his past material.

Yet the drawbacks of Hear Ye Him become more glaring with each new listen. An overabundance of album interludes slows the pace of the album dramatically, while also adding to the feeling that it’s far too succinct and plagued with brevity. Furthermore, the entire body of work doesn’t consistently maintain the fierceness that it begins with on “Smoke & Mirrors” and “Blasphemy.” While the Frank Sinatra-sampled “June” is a respectable song, it comes off as out of place and a tad too light hearted in its musical make up to fit in with the rest of the album.

It’s also obvious No Malice’s bars don’t always pack quite the same level of potency and punch as they did back in the Clipse’s glory days. True enough, it has to be realized and respected that he’s taking a new direction with his music due to his newfound purpose in life. But Hear Ye Him would be all the better if No Malice could rekindle the burning secular lyrical embers of the past more steadily instead of sometimes dismissively, albeit not completely, leaving them in the dust. And even though No Malice’s candor in owning up to his past as well as pretty much remaining the same guy is commendable and energizing, he hasn’t quite found the perfect equilibrium between the brash, self-assured passion in lyrical delivery of his former self and the more reflective and topical nature of his new Rap persona.

Still, with a renewed focus and an ambitious new musical direction, No Malice has created in Hear Ye Him a viable contender for at the least being honorably mentioned as a notable Hip Hop album of 2013. And unlike many of its contemporaries, both fans of Christian Hip Hop and those that steer towards more worldly fare, contradictions and all, can appreciate it.