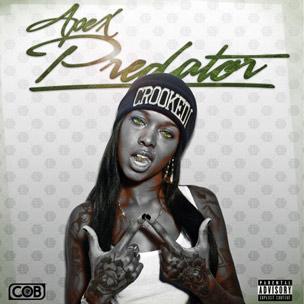 Crooked I is no newcomer to this Rap thing. Before Royce Da 5’9 was getting mainstream love, or Joe Budden released “Pump it Up,” Crooked I was signed to the legendary label, Death Row and making appearances on “The Wake Up Show.” So when he declares Apex Predator his debut album on “Vegas On Biz,” it may be true based on the connotation of the word “album,” but he’s definitely no rookie. Apex Predator provides a lot of what Crooked I and Slaughterhouse fans have respectively come to expect from the Long Beach emcee.

The album opens with “YODO (You Only Die Once).” Of the six million ways to die, Crooked breaks down a few. For those questioning Crooked’s ability to deliver content of substance, a couple tracks later, he delivers “Does Anybody Care.” Crook raps, “You could be fighting hunger / Not the Ghandi type, hunger strike / Fighting for something right / I mean fighting the type of hunger a little girl in a third world / Fights every day, ‘till her stomach is nothing but something that her spine is hiding under / Only been alive five summers / Hunger pangs, her heart beating like some live drummers…” The beat provided by Tabu is simplistic and mellow, with a basic drum pattern that allows Crooked to paint vivid pictures of harsh realities. On “A Lady Fell In Love” Crooked opens up about temptations, and the issues cheating can create.

Tech N9ne makes the only appearance by another rapper on “Let Me Get It,” which showcases both emcees spitting upbeat bouncy flows. Crook spits, “Tongue full of dung, they shit talking / Niggas want me dead? Fuck it, I’m still walking / Enemies in the club? Fuck it, I’m still parking / The coup, first put the roof on a milk carton / Walked in, they hand me the mic / Told baby girl, it gotta be tonight / My bed, or yo’ bed, yeah I’m thinking with both heads / You know great minds think alike…” On “Sumthin’ From Nuthin,” which features Crooked I tapping the mic and beat boxing as the backing track, he shows it doesn’t take much to make a dope song. In contrast, when Crooked I links up with Mr Porter, on “Crook N Porter,” he shows that with good production, he’s just as much of a factor as the instrumentation.

On occasion, Crooked swings and misses with punch-lines. On the title track, he admittedly reaches with “Real niggas don’t die / We like that shopping center bag full of tissue / We mall two ply…” On that same song, he also raps “You cross us in the street, nigga you’re done / Like a child support judge, we hold court son…” Additionally, on “Tell Them MF’s We Made It,” he raps, “You dudes Hollywood, say what? / I call you virtual sex, you fake fucks…” The production can be forgettable on some tracks, as “Crowns” sounds ripped from an 8-bit Nintendo game, with extremely basic keyboard synthesized electric guitars and digital blips punctuating the high-hats. “No Sleep Gang” is a similar offering, as it appears to have been made for the sake of adding bass to the album for people’s speakers.

At times, Slaughterhouse as a whole has been accused by some of not being able to write a good song. If there was any doubt Crooked I can’t as an individual, Apex Predator, should erase any such doubts. Unfortunately, Crook doesn’t display that ability consistently throughout project. Potential is a word seldom used for someone as experienced as Crooked I, however, with this being his proper debut album, you can definitely see the potential of what Crooked could accomplish for his next go round. While a decent project, Apex Predator falls short of what Crooked I is now clearly capable of releasing.