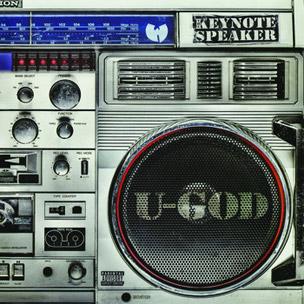 Maintaining the Wu-Tang legacy through solo albums is a task each and every member of the Staten Island collective has grappled with to varying degrees since the success of Enter The Wu Tang: 36 Chambers 20 years ago. Triumphant classics like Only Built For Cuban Linx… and Liquid Swords paved the way for more recent successes like Twelve Reasons To Die and Shaolin vs. Wu Tang. But misfires like Beneath The Surface and Immobilarity reinforce the opinion that bearing the Wu-Tang Clan’s iron flag has always been a tall order from the very start. In 2013, U-God becomes the latest member to try living up to the standard set by the Wu while also hoping to continue to prove himself a formidable solo artist in his own right with his fourth solo outing, Keynote Speaker.

U-God has carried the somewhat unfair stigma of being labeled by many fans as one of Wu-Tang’s weaker links prior to his first solo outing, 1999’s Golden Arms Redemption. But with Keynote Speaker, there’s at least a fair amount of evidence to the contrary. Kicking the proceedings off with the title track, he uses his signature deep, gravely voice and flow to ride a horn and percussion-heavy beat that makes for a genuine head nodder, automatically reminiscent of old school Wu-Tang in their hey day.

With that momentum in tow, U-God gathers stellar guest collaborators to formulate some of the best moments on Keynote Speaker. Producer Steve Reaves uses condensed, simplistic yet banging dings and drums on “Fire,” with Method Man proving he’s still got plenty bars. Similarly, U-God’s heavy rasp serves as the perfect compliment to set up a short but memorable verse from Styles P over a climactic sample on “Fame,”  while Inspectah Deck and Elzhi come through in the clutch on “Mt. Everest.” The latter is powered by Blastah Beatz’s elegant guitar strums and some hauntingly dispersed background voices—giving the song a deliciously insidious and sinister atmosphere. And the good doesn’t stop at the guest spots, with U-God himself using samples from two classic soul tunes in Gil Scott Heron’s “We Almost Lost Detroit” and The Temptations’ “Ball Of Confusion” to make “Skyscraper” and “Zilla” noteworthy tracks, respectively.

Sadly, though there are moments of achievement, for much of the rest of Keynote Speaker, U-God sounds dated and sluggish in his rhyme schemes and word play. It’s as if he’s trying mightily to keep equal pace with the Golden Arms we remember from some of his best work on classic Wu songs like “It’s Yourz” and “Triumph.” The problem is plain as day on “Room Keep Spinning” where U-God details a growing rift in his relationships with females. With a pedestrian, almost elementary flow, U-God fails to convince the listener that this is a worthwhile song. And while “Heavyweight” could have been a powerful and authoritative statement from the veteran New York emcee, it instead comes off as puny and uninspired.

The theme of lost opportunities for great material continues on “Tranzform,” a tale of phony friends that falls maddeningly short and instead becomes a trivial by-product of a Hip Hop song’s ability to create classic cautionary tales of backstabbers and two-faced allies that turn into rivals. Elsewhere, both “Stars” and “Journey” come off as commonplace at best, the latter featuring U-God spitting troublingly passive lines like, “When it comes to this Rap shit, not a stranger / Not Cedric, but I’m a entertainer…” and “Rap Hall of fame, y’all mention me / Got more bars than a penitentiary…”

Additionally, the skits on the album definitely slow it down and seem painfully misplaced. All of this factors together to drag Keynote Speaker further and further away from the solid project it could have been.

The final analysis on Keynote Speaker is that it’s an album with some stellar moments courtesy of guest appearances and from U-God himself. But the project fundamentally misses the mark in a several areas, be it the hit-or-miss beats and lack of consistency in overall production quality or U-God’s habit of falling into lackadaisical emceeing. Rest assured that the total legacy of Wu Tang is very much in tact, but U-God unfortunately hasn’t added much to it with his latest set of music.