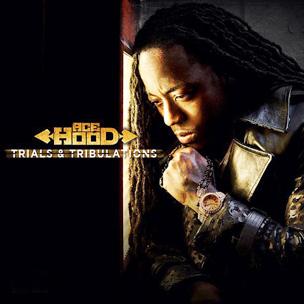 Charting Ace Hood’s significance within the Rap game is a tall order, which is quite perplexing given his resolute foray into making music for the streets. Take for instance his lead single, “Bugatti.” It’s relentless and catchy, marking his biggest hit since 2011’s “Hustle Hard.” However, calling it an achievement solely on his part would be an inaccurate claim. One could even go as far as to say he’s the record’s weakest link, with Future’s syrupy hook and Mike WiLL Made It’s vicious backdrop setting the tone for its success. And that’s the thing; no artist of his (supposed) caliber takes as much criticism as they do praise. Ace Hood is his own worst enemy, and his latest album Trials & Tribulations is a prime example of why that is.

When Ace Hood connects, he sounds like a compelling representative from the streets, laying claim to a narrative that highlights a man with a win by any means attitude. Over Arthur McArthur’s rousing production and powerful vocals from Anthony Hamilton on “The Come Up,” Ace rips through the record with skilled precision. His motivational side also shines on the passionate backdrop of “Hope.” Detailing his start from the bottom, he raps, “Small city, young nigga with a mindset / Ain’t never trying to be another convict / See I can’t lose, and I won’t quit / As long as God in my heart then I’m conscious.”

However, those moments are few and far in between, as Ace spends most of his time running down a list of topics he feels listeners want instead of creating music that comes naturally. In that respect, an otherwise blazing cut like “Before The Rollie” or the societal slant behind “Another Statistic” don’t sound organic. On the latter track, Ace Hood admirably pursues the issue of injustice within America, but his execution along with lyrical references to Trayvon Martin and Emmett Till are unconvincing (“Martin Luther King had a dream and my niggas do too / While Emmett Till beat and killed and gouged like a fruit”).

A problem that he’s has dealt with since his debut album, Gutta, Ace Hood’s lack of quality control becomes his biggest hindrance. “We Them Niggas” is as trite as the title suggests, with Ace spending four minutes making gaudy metaphors (“Her ass so retarded it belong on a short yellow bus”). Considering his alignment with Cash Money, a generic guest appearance from Lil Wayne was inevitable, and the lackluster appeal of “We Outchea” fades with Weezy’s unbearable shrill, “Young Mula baby.” Attributing his code of the streets, Ace Hood curiously weaves Auto-Tune into “How I’m Raised,” a decision that should have been scrapped from the first coarse note.

Ace Hood fails to deliver on Trials & Tribulations, and with four albums under his belt that have produced similar results, no rapper has arguably done so much and so little at the same time. Ace Hood has an irrefutable response for that, and it comes on the album’s title track, “Trials & Tribulations,” with the following, “Go ahead and count me out, you can talk behind my back / Don’t give a fuck about what you say, so you think my music wack / That ain’t what my banker said, couple million wired in.” He makes more money than us. Argument settled.