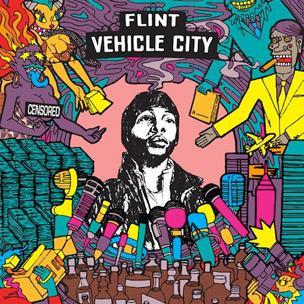 Extending the formerly prevalent legacy of priding oneself in lyrical efforts first and foremost (a trait rarely found amongst newer emcees searching for a quick cash grab), Jon Connor’s ascent has been steady, albeit slow. A shining symbol of the acclaim garnered from a skilled and determined work ethic, his unpredicted rise has brought light to the tough grind fostered in his hometown, Michigan’s criminally impoverished city of Flint. With the watchful eye of the public turned his way, Unconscious State is Jon Connor’s latest attempt to further the traction he’s gained thus far.

While he hasn’t switched up the aggression he’s come to be revered for, Unconscious State is a change of pace from Jon Connor’s high standard for providing substance. On the brash “25:17,” he explains why perhaps he’s entitled to let loose this time around, telling listeners, “I’m from where Rap niggas don’t blow up / Old niggas don’t grow up / Fast money done slowed up / Niggas die, police don’t show up…” and “I don’t do it for the trophy shit, I do it for the glory / I’m a Fli City survivor, I survived to tell our story…” Celebrating the spoils of fame, “The Sarah Song” shows appreciation for groupies lacking discernment, a topic recycled as he aligns himself with Hip Hop’s party animal Danny Brown on the turned up “Vodka & Weed.”

Focused mainly on impressing newcomers rather than catering to those already in the know, Jon Connor spends much of Unconscious State flexing his ability to ride tracks. “Michigan $#!*” features his Detroit neighbor Royce Da 5’9, as the two impressively run through rhyme patterns in rapid fire succession. And the Midwest flow reigns even greater on the Freddie Gibbs assisted “F’N Right,” emphasizing technique where words fall short of making a statement. “When I Was Young” (featuring Chris Webby & Smoke DZA) is more thoughtful, as is the cliché Talib Kweli collaboration “Rise Up,” both doing just a bit to balance out the lighter material scattered throughout the project.

Unconscious State reflects both growth and regression for Jon Connor, its vague title suggesting the self appointed “People’s Rapper” was less inspired to take on that responsibility here. Though “2 Week Notice” continues his prophecy as an ode to griping with a corporate day job, filler such as the Maybach Music Group homage “Let Us Pray” is found in abundance. Despite his adequate performance entertaining, Jon Connor’s experiment with fitting in where he usually stands out is taken as a sacrifice of his artistry in the chase for recognition.