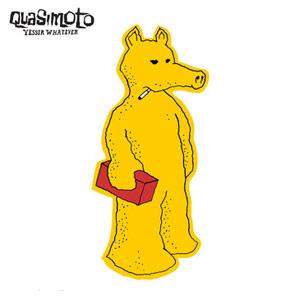 Since first appearing on the debut album from the crass LA crew Tha Alkaholiks in 1993, Madlib has traversed an inspiringly unique road within Hip Hop as much as outside of it. Initially gaining notice as part of the three-member Loot Pack crew throughout the ‘90s, Madlib quickly launched his prolific solo career with a first installment from his aliased emcee persona, Quasimoto, in 2000’s The Unseen (though the character made its first public appearance a year earlier on Peanut Butter Wolf’s solo debut My Vinyl Weighs A Ton). That album, which has rightfully come to characterize Quas’ inspiringly off-kilter “voice” and infamous vulgarity, was widely accepted by fans and critics alike, if not for its acting as a highlight reel of top-notch Madlib production then perhaps for simply being so daringly odd. Still, neither that debut nor its only follow up, The Further Adventures Of Lord Quas in 2005, fooled fans into thinking that a stomach full of psychedelics or pitched-up vocals suddenly made Madlib a top-tier rapper. Either way, adopting the voice and character of the fictional “Lord Quas” has given the obviously reclusive California producer a diary-like platform for his incessantly amusing and trippy ramblings (the heavy dose of psilocybin provides another explanation of Quasimoto’s underground appeal).

Yessir Whatever isn’t a proper follow up to The Further Adventures Of Lord Quas as much as it is a straightforward compilation of previously and haphazardly released Quas recordings. While fans will instinctually jump at another chance to hear that unmistakable voice, turning the record over will likely reveal a familiar tracklist. On the one hand, the album is most relevant to the type of fans compelled by a release full of b-sides and out-of-the way tracks. On the other, these are the same type of fans that will already have heard and/or owned almost all these songs already.

Still, Yessir Whatever is a solid compilation that will probably present new songs to the casual fan. Given that the music was recorded over a 12-year period, it’s not exactly a perspective into Lord Quas’ most contemporary hi jinks (if he’s still in our realm). The album, like any Quasimoto release, is obviously centered on Madlib’s signature loopy production. And while he may be particularly known for culling oddball rarities as sample fodder, he’s also just as quick to flip a supremely common break like Bob James’ “Nautilus” into a haze-driven anthem in “Sparkdala.” The track begins with Quasimoto urging Madlib to “explain to these people why you so dedicated to that tree you been smoking,” (this weird inner dialogue between Madlib and his alter ego is another Quasimoto staple). “Sparkdala” finds Madlib rhyming almost completely as himself and spitting basic bars like: “Now I strictly smoke chronic / So I can feel the sonic / Drinkin’ 40’s, that’ my tonic / When niggas smoke my shit, they all be on it / By the time they done, they be like ‘yeah that’s bionic.’” Most rappers would get berated for such simplicity and awkward cadence but this is obviously part of the allure (listeners certainly aren’t expecting innovative rhyme-schemes or delivery). The type of brashness that Madlib contracts out to Quasimoto arrives less than a minute into the album when he raps: “Backs so fat, have you all on smile / Take my dick to the motel, do things that make you raise your eyebrows.” The next song, “Seasons Change,” which was released as the B-side of a 7” record in 2005 after apparently having been cut from Further Adventures because of sample clearance issues, is another super simple if not slightly disjointed loop, this time built out of a Roy Ayers song. Like most of the other beats and Madlib’s style in general, the production isn’t built out of intricate layering or meticulous detailing, instead, it comes off like something half-finished and rough around the edges, it’s a calling card the producer has built a career out of. And still, while there might not be much to digest, the track is immediately and consistently gratifying. Perhaps the release’s high point comes packaged in the form of “Am I Confused,” a song released more than a decade ago in the UK, the beat is about as polished as the producer puts out while staying true to his minimalist ideology. It’s also the source of some of Lib’s more serious musings: “Yo, living in these times of life is getting hectic / We got to find a method to survive the headtrips / I wonder everyday if this is how it was meant to be / Looking at society, police always eyeing me.”

Ultimately, Yessir Whatever is a fine round-up of mostly recognizable tracks; at the same time, it also acts as a firm reminder that we haven’t heard any new Quasimoto in close to a decade and that the possibility of a proper follow-up to Further Adventures seems less likely by the month. The album is chock full of quintessential Quasimoto but what’s most disappointing about it is that instead of actually releasing new old material, and Madlib has consistently referred to the vaults of unheard Quas songs, the label has beautified otherwise accessible material.