Rittz - The Life And Times Of Jonny Valiant 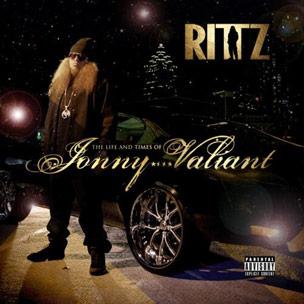 Despite the pressures that are attributed to preparing a debut album, Rittz finds himself in a unique position for success. A Slumerican ally through and through, the Atlanta rapper joined Strange Music last year, and in doing so bought himself a slice of creative control for what would become The Life And Times Of Jonny Valiant. With his Alabama brother and arguably the biggest independent label behind him, Rittz follows through with a project that captures the essence of his Gwinnett County upbringing.

Much like Yelawolf, Rittz finds lyrical traction in examining his personal misfortune. Set to a gloomy backdrop, his words on “Misery Loves Company” flow off the tip of his tongue with ease as he details a broken conscience formed by adolescent negligence and substance abuse. Similarly, “My Interview” dissects different aspects of his life through public perception. While the record is rooted within a flat premise, it draws out a hostile side of Rittz that is warranted considering the repetitious questions he encounters. His rocky relationship takes center stage, with “Always Gon Be” candidly illustrating the pangs he goes through to form a better life for himself and his girl while out on the road.

Of course, discussing Rittz wouldn’t be complete without mentioning his rapid-fire delivery. Likely a selling point in his deal with Strange, the Southern chopper holds his own alongside Tech N9ne and Krizz Kaliko on “Say No More” for a fiery track that will burn out the replay button. He keeps the swift syllables rolling on “For Real,” but where Rittz makes his most progress is when he pushes his musical boundaries. “Switch Lanes” may initially come off as a “girl record,” but from his vibrant demeanor to Mike Posner’s melodic offerings, it’s a convincing performance that will have fans pining for more. Taking a more soulful approach, Rittz taps Suga Free for a playful cut that’s right up the Pomona, California native’s alley.

The brunt of the albums musical transgressions come when Rittz loses sight of his intent. In what was likely one of the more anticipated records on Jonny Valiant, the Yelawolf-assisted “Heaven” comes off as a cryptically clumsy effort. The same can be said for “F**k Swag,” a callous record that fastens Rittz as a disgruntled peer. Though it’s clear he’s internalized a disdain for rappers that gain notoriety based on their look rather than skills, the negative energy he put into making “F**k Swag” could have been used more productively elsewhere. Over a menacing beat courtesy of Five Points Music Group (spearheaded by DJ Burn One), “Amen” starts off solid with Rittz revisiting a recent coke binge gone awry. However, instead of continuing with the gripping experience, he awkwardly transitions into verses about homelessness and prom queens. Nothing wrong with diversifying, but a bit of focal discretion goes a long way.

While Rittz hasn’t yet reached his recording pinnacle, The Life And Times Of Jonny Valiant provides a thorough impression of his abilities as well as what he can strive for in the coming years. Going on nearly two decades since he first grasped the notion of becoming an emcee, it may have taken longer than expected, but Rittz is finally seeing the fruits of his labor flourish.