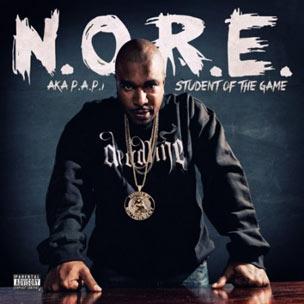 Noreaga’s spot in Hip Hop history is solidified. Whether it be his work on the Capone-N-Noreaga projects, or his solo albums, his relevancy can’t be denied. He played a major role in initially showcasing arguably one of Hip Hop’s greatest producers with the Neptunes-produced “Superthug.” And N.O.R.E. continues to bring personality and a sense of humor to the game while still maintaining his rep in the streets through his music, and his non-musical incidents outside the vocal booth. With all that being said, as with most established veterans in the game, releasing an album at this point can be a risk. Attempting to fit in with what is hot now may lose your original fan base. Sticking to what you’ve been known for probably won’t connect with the new album buying audience. With Student Of The Game, P.A.P.I., as he’s known now, attempts to do a little bit of both. The results are a mixed bag, which probably won’t satisfy either crowd.

The album starts off with an intro by another son of Lefrak, Queens, Houston Rockets guard turned analyst, Kenny Smith, and then it goes right into the title track. On “Student Of The Game”, P.A.P.I. raps, “I’m still doing what I do, way past you / This album’s from the heart, I sort of feel like I have to / Prove shit, do the new shit / And the true school shit..” basically letting the goal be known off top. The track is a Cookin’ Soul beat, but it has a very golden era, Diamond D feel to it. Pete Rock provides a real dark vibe on “Vitamins,” which makes you wonder why N.O.R.E. and “Soul Brother #1” haven’t worked together more often. “Camouflage Unicorns” reunites N.O.R.E with Havoc and Tragedy Khadafi. With Havoc handling the hook, the combo of N.O.R.E and Tragedy definitely brings back an early to mid-‘90s vibe. “Built Pyramids” hooks N.O.R.E. up with another Queens legend, Large Professor. The sound is a distinctly different one for N.O.R.E, but it’s a welcomed change

When N.O.R.E tries to keep up with the times is where Student Of The Game suffers. “Thirsty” sounds like a beat that’s been passed around several times. “Tadow” combines N.O.R.E, French Montana, 2 Chainz, and Pusha T on a track so bad, not even a Pusha T verse could save it. Even worse is the combination of N.O.R.E and Jeremih on “Only Bad Ones,” with Jeremih using way too much after effects on his voice, and what has to be one of the most generic beats in a while. The track “The Problem” reunites N.O.R.E. with Pharrell, and the results are a representation of one of the major problems of the album. Pharrell’s sound, along with a lot of things in Hip Hop have changed. N.O.R.E. for the most part hasn’t–combining the two results in a bad blend. Student Of The Game is at its best recreating a sound, and vibe of that has been absent from the game for some time.

N.O.R.E tries to recreate “Banned From T.V.” with “Faces of Death.” The features of Raekwon, French Montana, Busta Rhymes and Swizz Beatz can’t match the original lineup of Nature, Big Punisher, Styles and Jadakiss. The beat composed by Jahlil Beats doesn’t give off the epic feel Swizz did on the original. Student Of The Game has its moments, but they are few and far between, lost amongst filler, comical skits, and some very poor attempts of to keep up with what is popular now. N.O.R.E doesn’t have to prove anything to anyone, and his attempts to do so drag this album down.