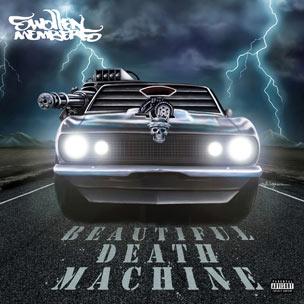 Much can be made of the work put forth by the Swollen Members since Madchild kicked a heroin addiction. After he became sober- around 2009- the trio dropped Dagger Mouth, and haven’t slowed down since. Their newest album, Beautiful Death Machine, marks the group’s fourth release in that four-year span.

Per the old cliché, “If it ain’t broke, then don’t fix it,” Beautiful Death Machine utilizes the formula most commonly used by the Swollen Members: deep, dark production laced with honest and thought-provoking lyrics. By sticking to the same blueprint as always, Madchild, Prevail and Rob the Viking have forced themselves to up their respective efforts with each album they release. It’s a tricky notion, but there are isolated moments on Beautiful Death Machine where they succeed with displays of truly elevated lyricism and production.

Right from the get-go, the album establishes an effective movement between tracks, with the intro-track “Inception” followed by an interlude, into the posse cut “Death To You,” featuring Vinnie Paz, and La Coka Nostra members Ill Bill and Slaine. Four different interludes scattered about the album in hopes of creating seamless transitions from track-to-track, similar to a traditional concept album. It also captures this vibe thanks to its thematic production.

A true instrumentalist, producer Rob the Viking maintains a consistent, prevailing tone, all while changing melodies as needed. From horns (“Bax War”), to electronic music (“Juggernaut”), to just plain, sample-based production (“The Difference”), Rob is able to craft beats for fans of just about everything. On “Juggernaut” he displays arguably the album’s best beat: an electronic and bass-heavy track that delves heavily into elements of Dubstep music. What’s more, both Madchild and Prevail ride their verses with impressive flows, creating for a truly infectious listen. “Juggernaut” stands out as a testament to the growing popularity of Electronic Hip Hop.

While Rob the Viking deserves praise for his efforts on the beats, Beautiful Death Machine thrives equally for its lyrics. Madchild and Prevail show up for each track, aggressively tackling verse after verse with blunt rhymes and flows of varying speeds. On “Death To You,” Madchild boasts: “These young punks I’m schoolin’ ‘em like Cambridge / Slap these appetizers I’m the mothafuckin’ main dish / At first they’re on my mind but then they’re fallin’ off like dandruff / Now they call me a white devil like Colonel Sanders…” Both emcees stay on the attack for the majority of their verses, and they showcase lyrics that are more angry than anything else. The lone exception comes on “The Difference” where Rob the Viking calms everything down with an upbeat bass and piano sample, and both emcees provide lyrics that are more positive.

For all of its noteworthy aspects, Beautiful Death Machine falls short on some levels. While the first three-quarters flow nicely, the last tracks seem essentially like filler, and the fluidity from the album’s beginning doesn’t carry over to the end. Even “Colossal Beasts,” a collaboration with Apathy and Celph Titled, boasts solid lyrics. But a monotonous beat dampens the track. They expand into Dubstep and Electro territory, but unlike A$AP Rocky or Big Boi’s recent forays into those respective genres, there are times when the pairings feel forced. And while the trio’s bars often vacillate between funny, insightful and just overall impressive—Madchild’s references to dinosaur fellatio on “Juggernaut” leave a lot to be desired. Longtime Swollen Members fans likely won’t raise an eyebrow, but the consistent horrorcore references are likely to turn off potential new fans that aren’t down with the macabre subject matter