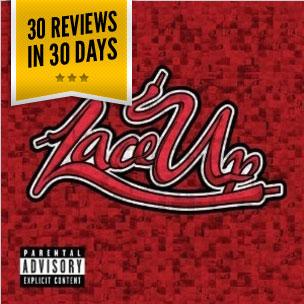 As he takes a break from rapping on the nostalgic “On My Way,” Machine Gun Kelly candidly wraps up a series of teenage stories by proclaiming, “We too grounded to be Hollywood, man.” It’s a phrase that is indicative of the Cleveland rappers’ brisk yet fruitful career thus far, which has fluctuated over the last few years between personal success and public controversy. His debut album Lace Up sheds light on these opposing characteristics while also revealing an artist who is still growing into his own skin.

MGK’s appearance as a reckless, spur of the moment individual is one that many would initially recognize him for, with “Wild Boy” and the title-track doing little to curb this belief. On the former track, MGK is joined by Waka Flocka Flame for a rowdy offering that is entertaining on the surface but lacks creative value (“Suck my dragon balls bitch, call me Goku”). “Lace Up” fares better, with Kelly finding the right rhythm alongside Drumma Boy’s synth-heavy production. Lil Jon’s presence is also a nice touch, who sounds more relevant here than he has in some time.

Public image aside, what makes Machine Gun Kelly such an admirable act is the fact that he wears his heart on his sleeve and does so with a ravishing intensity. With the exception of M. Shadows’ flagrant wailing near the end, “Save Me” is an impressive record that puts MGK’s journey into perspective over slick guitar licks and pressing drums (“Mother fuck this rap shit, trying bury your boy six feet, let me show you ‘bout real / Try telling me that you can make it up out of the city, 26 dollars to multi-mill’s / Face inside of the XXL, try coming back to the Eastside still / Well bitch I did and it’s still the kid, labeled a Bad Boy before this deal”). This same intensity is found on “Edge of Destruction” and “D3mons,” the latter taking a menacing look into his rage-filled psyche. In each instance he chooses the appropriate guests to accompany him, which in turn make for a solid performance.

The album finds its lowest moments when Machine Gun Kelly does indeed go Hollywood, a decision that was arguably out of his control. Regardless, radio-friendly tracks like “Invincible,” which he’s confirmed as manufactured, pull him out of his comfort zone and into industry purgatory. You want to enjoy it, as inspirational rhymes from MGK carry a motivational appeal. But between the blatant cross-promotion (an Interscope artist referencing Beats by Dre? That’s a first) and Ester Dean’s trite hook, the record is quickly run into the ground. Then there’s “All We Have,” a fluffed-up cut that attempts to go deep but misses the mark completely. He would have been better off with something similar to “See My Tears.” Still on the pop side, this track avoids an overtly awkward tone that the aforementioned ones achieve.

Full of passion, charisma and a lyrical dexterity that is undeniable, Machine Gun Kelly certainly has the ability to rap for the long haul. With that said, Lace Up is an imbalanced project that fails to establish MGK’s grand message. His debut is decent at best, with hope that his following projects yield better results.