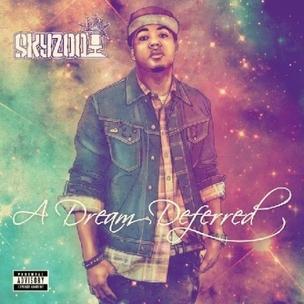 This one’s on Chi-Ali. When the Native Tongue-associated child-rapper’s “Age Ain’t Nothin’ But A Number” flashed up on Ralph McDaniel’s Video Music Box show in 1991, it inspired a young Skyzoo to start rhyming himself. Two decades later, and after a series of mixtapes and worthy-if-not-spectacular albums, A Dream Deferred finally confirms Bed-Stuy Sky’s arrival as a fully-fleshed artist.

From the outset of the album, Sky spits with a combination of power and finesse. After the melancholic opener, “Dreams In A Basement” plays something like an overture and sets out the concept for the project. The album punches into life with a series of sparky tracks. The brash and brassy 9th Wonder-produced “Jansport Strings” gives a respectful nod to the influence of Chi-Ali on his career (evidenced by the remix), but the ruggedly-wrought “Pockets Full” has Sky channelling the aura of an early-era O.C. in his prime as he spews out words with the fire and heart of a kid rapping on a Brooklyn block corner while also weaving in a broader and worldlier outlook. As he puts it himself later (on the stellar “How To Make It Through Hysteria”): “Seen it, jumped in and was lucky enough to believe it /Lived it, went and penned it/ And left the rest to the speakers/ Wrote it the way I know it/ You heard it, you saw me show it.”

Skyzoo’s sincerity as a rapper is shot through A Dream Deferred, but the album has a seamless musical charm. After the opening third (which is largely powered by !llmind’s booming beats) the project morphs into a mid-section that delights like a woozy hip-hop lullaby: The tempo drops, the lyrics become more personal, and guest R&B vocalists are used intelligently, with Jessy Wilson, Raheem DeVaughn and Jared Evan adding a soothing touch to the run of “The Knowing,” “Drew & Drewin,” and “Realization.” Then, somewhere between the synth-infused “The Rage Of Roemello” and the glorious “How To Make it…” comes the wake up call as the album enters the home-stretch with a string of rousing and euphoric tracks that overflow with soul and positive passion. Call this one a dream confirmed.