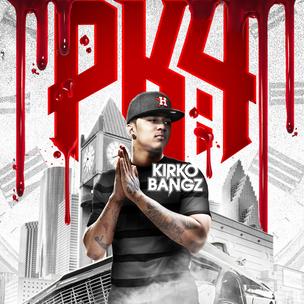 Despite what the current crop of bubbling artists may have you think, originality is an indispensible trait that exposes acts invented by a label and those that breathe Hip Hop. Currently recognized best for last years’ club standout “Drank In My Cup,” Houston rapper Kirko Bangz looks to make that transition with his latest effort Procrastination Kills 4.

The first half of the mixtape plays like an obligatory assortment of easily digestible records, with a cast of predictable features (Young Jeezy, Chris Brown and French Montana) serving their purpose. None of these records stand out, but they do retain a certain mass appeal quality that is respectable for 2012 standards. Except for the Tyga-assisted “Nasty Nigga.” With an obscene approach that warrants a trash can, the track convincingly displays why rappers get a bad rep (“My nigga tell me to put my finger up in her butt / He told me that’s the fastest way to make these bitches nut”).

Interestingly enough, Kirko Bangz finds his best inspiration of lyrical narratives when rapping over other artists’ beats such as Meek Mill’s “Used To Be” and Big K.R.I.T.’s “The Vent.” Saluting the independent yet fragile females who are on their grind in the latter track, he raps, “And to the women gettin’ dollars in the club / God gotcha, getcha paper, stack it up / But shit, it’s kind of crazy young girls turning strippers / ‘Cause the last nigga stripped her of her love.” “The Vent” may not match the intensity that Big K.R.I.T. harnessed on his version, but Kirko Bangz does the track enough justice that he’ll avoid scathing criticism from Krizzle’s underground constituency.  This introspective momentum is carried into tracks like “Help Me Out” and “On My Own” which feature a southern twang that should simmer well in his hometown. He even does a bit of lyrical bashing on “Stop Bitchin,’” though choosing a Drake interlude to rhyme over was probably a poor decision considering their sing-song rap comparisons.

Procrastination Kills 4 streamlines the commercial gumption that has gotten Kirko Bangz to this point while also showing depth that likely won’t be noticeable if his career becomes a series of radio singles. At this time he’s yet to separate himself from the pack, but with some more lyrical seasoning and an improved (read: distinct) presence on the microphone, Kirko Bangz is on the right path to success.