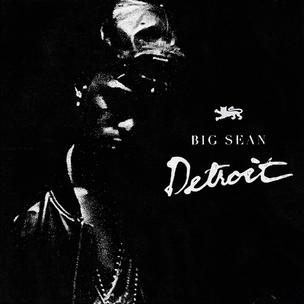 Since releasing his debut disc Finally Famous: The Album a little over a year ago, Big Sean has gone from Kanye West’s budding Midwest protégé to a commercial name that rubs shoulders with the likes of Lil Wayne and Justin Bieber. More recently featured on Cruel Summer cuts “Mercy” and “Clique,” it’s clear that Big Sean’s stock is rising exponentially, and holding off on a project (big or small) would only hinder his momentum. Therein lies the inspiration behind his hometown-labeled mixtape, Detroit.

Respectfully, Detroit plays like a loose collection of songs without a real sense of direction aside from the aforementioned motive. With that said, highlights are plentiful as Big Sean basks in his newfound affluence. From “24 Karats Of Gold” to “RWT” and “How It Feel,” he parades throughout the mixtape with gusto, and in no certain terms does this go unwarranted.  It also can’t be emphasized enough the impressive alliance that Sean strikes with fellow native KeY Wane, whose fluid, soulful production seamlessly blends with his charismatic lyricism. This is evident on “Life Should Go On,” an earlier released record that smoothly glides by as Big Sean and Wale wax on about a better life. When the dust settles, Ralph Folarin takes verse of the project here:

“I’m trampolining on niggas and I actually mean it / A fly nigga, I keep having the gravity grievous / And while these niggas keep hating, they be asking for features / That’s like a complacent atheist is asking for Jesus / Riding around without a fuck given / Behind them dirty plates like a catcher with a mitten / The best in my position, I’m passionate with lyrics / They ain’t fucking with the kid like Chris Hansen in the kitchen.”

The downside of the mixtape emerges when Big Sean fails to make an earnest attempt in his verbal delivery, no matter what the subject. “Mula” blindly settles for a sluggish hook and rhymes that bare any depth, while the relevance of “Do What I Gotta Do” wouldn’t make it out of the strip club. Even on the slightly-encouraging “I’m Gonna Be,” the track lacks lyrics as Big Sean instead opts to awkwardly sing throughout, which in turn ruins the graceful backup vocals from Jhene Aiko.

Detroit is a celebratory, albeit inhibited project that accentuates Big Sean’s current status with some assistance from his industry friends. As he gears up for his untitled sophomore album, which he describes as a much more personal successor to his debut, listeners can bump Detroit knowing Big Sean hasn’t forgotten where he came from even if there are more commas in his bank statement.

Listen to Detroit by Big Sean