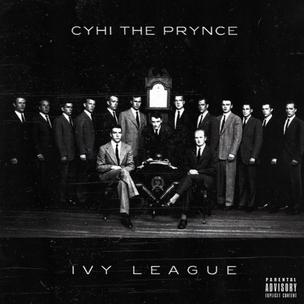 Cyhi The Prynce has a lot of very stylish and very successful Rap friends. These friends include the on-and-off-again G.O.O.D. Music troopers Pusha T, Big Sean, Kid Cudi and Common. Then there’s the swankmaster Kanye West himself, who presumably sees Cyhi as his latest “passion project.” The thinking behind Cyhi’s Ivy League Club mixtape seems to be hooked on the Georgia-born rapper’s relationship to his peers; if he surrounds himself with enough of them, some of their luster and success will rub off on him. But there’s a flaw in this reflected glory theory: While Kanye and Pusha can convincingly rap in a manner to make you think they really do spend all day strutting down the Champs-Elysees like a couple of Margiela-sponsored peacocks, Cyhi seems to suffer from a chronic lack of good taste – and he relays that in a clumsy manner through lyrics littered with cliches. He’s better off sticking to a more lyrics-driven tejectory; something Cyhi is good at (even better than some of his counterparts).

The cliches that afflict Ivy League Club reach a pinnacle with “Tool,” a team-up with Pill and Trouble that sees the trio re-cutting Sade’s “Smooth Operator” to run around the lyrics “I pull my tool on a hater.” It’s as if they’d prefer to be lurking around at a karaoke club than crafting a Rap project. And it doesn’t stop there: Anita Baker’s “Sweet Love” becomes Cyhi muttering on about “chilling with my feet up.” It sounds like it should be funny – like a light-hearted parody – but instead it comes off as misguided and a little embarrassing. (Cyhi’s attempts to convince that he’s a mature man-about-town on the song also falter as he drops uninspiring tosh like, “What you know about a manicure and pedicure?/ Shorty, you won’t understand until your brain mature.”) The overall thought when approaching this project is “Cyhi, you’re better than this.”

Most indicative of the problems with the Ivy League Club though is “Entourage,” one of the closing songs on the project. As the title suggests, it basically attempts to point out that Cyhi is capable of sending hilarious drunken texts to some more famous rappers (and, presumably, that sometimes they’ll respond with a polite “LOL”). But instead of lining up alongside the great posse tributes of old, Cyhi sounds like he’s at pains to prove his worth through association. It’s like he’s the guy outside the club hollering that he knows the headliner. He might find that staking a claim as a rapper on his own is more likely to see him ushered inside than his current tactics.

Listen to Ivy League Club By Cyhi The Prynce