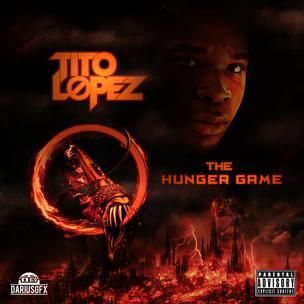 With Rap having blossomed from the ghettos of New York City into a globalized competition for the hearts and minds of listeners, emcees hailing from varying regions presently draw from an amalgam of formerly dominant influences. Amongst the south’s up and comers taking inspiration from vicinities far out of his reach is Mississippi’s Tito Lopez, cosigned by the likes of Organized Noize’s Rico Wade & Dr. Dre and thrust into spotlight on the heels of the breakout smash single “Mama Proud.” The Hunger Game is the latest of an extensive string of releases from Tito, aiming to elevate his status steps closer to that of a household name.

While riding the wave of his state’s recent rise, Tito Lopez is unexpectedly dissimilar to Big K.R.I.T. and David Banner as his penchant for intricate wordplay is more common to East Coast spitters prone to romanticizing Hip Hop’s Golden Era. The project’s apt title reflects his tenacity towards recognition as he rides beats effortlessly with an original voice and command in the booth that shines through on “Try Me,” the Gang Starr homage “Mass Appeal 2.0” and the aggressive head nodder “Conversation With Tito.” Conveying a dash of variety to his persona, Tito’s points of view expand to loving a troubled woman on “Jessica,” taking a glance inward to share his troubles with “It’s Hard Pt. 2” and catering to country folks with the laid back “Ventilation” designed for slow car riding. These distinguishing moments indicate a diverse charisma as he continually primes himself for glory.

Minor drawbacks arise from less than groundbreaking topic material about his creative grind and its detractors with “No Haters Allowed” and “They Told Me,” both strong enough to likely impress listeners despite mundane messages. Though slightly reflective of limited ideas, The Hunger Game is an enjoyable mix of entertainment and higher wisdom from Tito Lopez as he has studied and finely honed the craft of emceeing in staunch determination to further the Crooked Letter State’s prosperity.

Listen to The Hunger Game by Tito Lopez