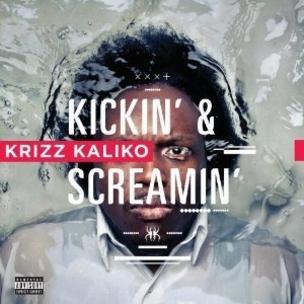 Strange Music is an army. With Tech N9ne posted up as its general, the Kansas City cabal has successfully entrenched its roots across the underground strata of the Rap map. Independent, self-sufficient, and known for releasing music hooked around high-octane raps, the Strange Music message has spread globally. Now it’s the turn of the movement’s second-in-command, Krizz Kaliko, to build on Tech’s Klusterfuck EP from earlier this year. Although for all of Kickin’ & Screamin’s virtues it too often flirts with diluting the Strange Music battle cry.

The most persuasive moments of Kaliko’s 17-track effort stick to a rugged and uncompromising formula. On opener “Dancing With Myself,” he raps with heart over a robust beat interwoven with misshapen synth lines: “How you make it when you fat, black and you rap wack to the naked ear?/ Eleven years and I never even should have made it here/ When you a freak of nature they hate you/ Stacks of paper can save you/ And take the chances they gave you/ These major labels enslave you.” As the sentiment hits home, he sounds like he’s reciting a pledge of allegiance to the Strange Music cause. Kaliko’s team up with Tech N9ne and Twista, “Kill Sh*t,” is as ferocious and lyrically intense as you’d expect, while “Mayday,” in cahoots with Chamillionaire and Rittz, is similarly defiant. Business as planned, then.

At times, Kickin’ And Screamin’ veers off-track to diminishing effect. With its poppy, ’60s sheen, “Kali Baby” sounds like Kaliko’s been misled by the early-era Beach Boys tracks on his iPod, “Dumb For You” features an unnecessary T-Pain hook tainting a slinky, stripped-down Timbaland-style production, and “Species” sounds like Lil Wayne karaokeing his way through Outkast’s “Funky Ride” after being intimately tampered with by aliens. Instead of offering the project depth, these schizophrenic tangents make the album something to skip and pick through.

At the onset of Kickin’ And Screamin’, Kaliko vows, “If they don’t understand my music/ And no one else is dancing to it/I’m dancing with myself.” It’s a resolute statement, but it’s one perhaps no longer true: Thanks to Strange Music’s growth, its artists aren’t quite the lone rap soldiers they once were. Now they need to focus on making sure their propaganda stays on point.