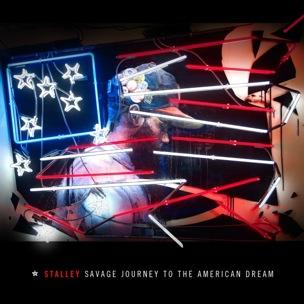 Nearly a year since signing with Rick Ross’ Maybach Music Group, Stalley delivers Savage Journey To The American Dream, a project that finds the Ohio emcee distinguishing his Midwest sound and likewise sticking to his BCG (Blue Collar Gang) roots despite his new position.

While Savage Journey is missing the sounds of Lincoln Way Nights (Intelligent Truck Music) architect and fellow Ohio-native Rashad, Stalley develops an artistic connection with The Block Beattaz that warrants similar praise. The much-anticipated Ross collaboration “Hell’s Angels (American Heathens)” doesn’t disappoint, as the two rappers load up lyrical clips that fit within the Maybach Music mission statement, and production from the Alabama duo follows suit. Then on the short but sweet “Route 21,” The Block Beattaz create a sedated backdrop that highlights Stalley’s stream of consciousness flow. Coming full circle, “Home To You” is the type of track that can be appreciated by fans and critics alike. The light melody, coupled with Anthony Flammia’s vocals, captures what Stalley could potentially do from a commercial standpoint.

For all his progress since 2008’s Goin Ape, Stalley is still making the transition from a rapper who has concepts on paper to a polished artist that can execute said concepts with skilled precision. The best example of this is “Seen It All,” where he flatly describes the molding of his character within the confines of Rap. A strong sense of reflection is being forged here; however, it’s hard to understand him through a delivery that’s filled with cluttered bars, not to mention a hook that is less than commendable. On the other side of the spectrum, “Live At Blossom” is an amazing piece of music that is as inspiring as it is daring. Over pulsating drums and triumphant synth courtesy of Soundtrakk (who ironically also produced “Seen It All”), Stalley discovers his lyrical zone. For the most part, Savage Journey settles in between these two extremes, whether the topic of interest is women (“Lover’s Lane”) or ambitions as an emcee (“Petrin Hill Peonies”).

If last year’s Lincoln Way Nights was the project that solidified Stalley’s talents as an everyman lyricist who embraces hard work and humility, then Savage Journey continues this theme with a more confident and composed vision. Additionally, it’s clear that Stalley hasn’t been forced to change his formula since joining MMG, which is all the more convincing that the move will not compromise his music in future releases.

Listen to Stalley – Savage Journey To The American Dream