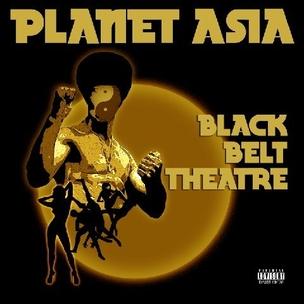 Planet Asia goes all Black Dynamite on his latest release, Black Belt Theatre. Anchored in his appreciation for Kung-Fu flicks, littered with comedic injections and bombastic displays of controlled aggression – it’s like the Fresno-native put on a black leather jacket, a ’70s-era afro with matching mustache, and a vendetta against Anaconda Malt Liquor before stepping into the studio. The beats revel in unabashed boom-bappery. The rhymes largely resonate whether combative or introspective. At its best, it’s an able exhibition in vintage lyrical entertainment.

PA’s rugged, unorthodox delivery sounds especially vicious over souled-out dustiness like “Tell The World” and “Furniture” – even if the latter is a kinda-love-rap. “Big Fish” – with its detonating bass line and infectious hook – settles in early, immediately instigating a reach for the rewind button. As does “Fuck Rappers” featuring Willie The Kid, Fashawn, and one of Planet Asia’s most contagious stanzas:

Even when the production switches to more modern fare, The Five Element Ninja fortunately maintains character. “All Mine” juxtaposes a sample-free, key heavy, might-as-well-be-R&B backdrop with a gritty crime tale featuring Paul Wall. Sonically, it’s an absolute outlier from the rest of BBT and comes dangerously close to blatantly pandering towards corporate approval. But PA still comes away clean because he keeps the narrative cruddy.

The only real frustration is that BBT is about ten minutes too long and too smothered in crew love. “Golden State” feels unnecessary following “Bruce Lee” (featuring Rasco and Chace Infinite), for example. “Diamond Life” (featuring Camp Lo) invites ear nausea, for example. And while Raekwon, Paul Wall, Chace Infinite and Ras Kass (“Classical”) absolutely sound inspired and Willie The Kid’s ill assonance on “Fuck Rappers” nearly steals the spotlight – with 23 guest appearances over 20 tracks, diversity drowns in a sea of posse cuts. It wilts under the weight of redundancy. In spite of that, Black Belt Theatre is absolutely entertaining, just often enough.