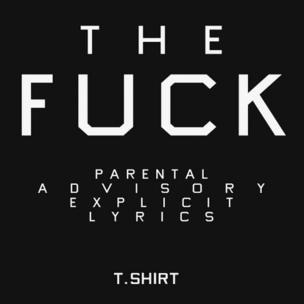 Last month, Queens spitter T.Shirt lost a hard drive containing studio sessions that were to become The Fuck. With all progress essentially lost, he had the choice to either start from scratch or release what he had as-is. Shirt went with the latter, dropping a project that was “about 94% done.” Despite its circumstances, The Fuck sounds far from amateur, an album that unleashes his many voices without letting them overstay their welcome.

brings a boom-bap backdrop and some well-aged big band horns, but the party doesn’t last long, as the horns descend into mucky, profanity-littered curmudgeon rant “Old Man Angst.” Shirt’s cutting tyrades then lighten up with the comedically jaded  “My Bitch Don’t Even Like Me,” a tale that bounces along to its punchy synth and funky bassline.

The album’s best moment is his most personal – “I Never Knew Money,” whose drum break and haunting piano loop set the tone for Shirt to spit about the harsh reality of relying on a gambling addict to pay the bills. As he tells it: “My father was a gambler but he cleaned up, one long weekend we thought he might’ve been dead / He went missing and didn’t come home for three days, finally showing up, guess what this muthafucka said / That he was locked in the basement of where he worked with no food due to a crazy accident / We found out that was complete bullshit, and he disappeared to play horses and gamble the fucking rent.” “I Never Knew Money” is the soul of The Fuck, its bars informing both Shirt’s biting criticisms and his dark sense of humor.

The album’s productions are sonically rich, full of beating drums and haunting high-end melodies. Every beat seems well placed for each topic – they sulk when he spits vitriol and get playful when he’s looking to simply showcase his skills (“Southside Phantom”).

The Fuck is by no means a breath of fresh air, but the breadth on display here is pretty impressive, especially considering its short length. None of its ten songs feel particularly out of place – a true testament to its sequencing. Shirt never seems to dwell on The Fuck, and this choice helps frame a well-rounded listening experience.