Yo Gotti - Live From the Kitchen 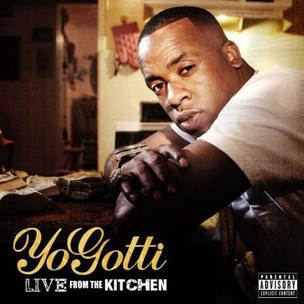 Yo Gotti deserves a medal, because Live From The Kitchen is just about the most predictable rap album you could ever listen to. That’s quite a dishonorable achievement for most, but in Gotti’s world, predictability plays heavily into a fan base that wants the same kind of songs to slip into rotation. From the title alone, you can guess what the Memphis-raised Yo Gotti’s studio debut is going to sound like – and as it progresses it confirms every suspicion.

Being that it’s called Live From The Kitchen, you know that Gotti is all about his trap raps and talking about the white powder world he was so successful in. And that’s largely all he can be bothered to write about, right from the opener, “Testimony,” which he kicks off by talk-rapping, “If I should die ‘fore I wake/ I pray the streets my work to take.” (Now that’s a legacy!) The producers he’s procured beats from include (of course) Lex Luger, Drumma Boy, Lil’ Lody and Shawty Red. While it’s a lofty enough set of names, they hand Gotti beats that largely sound like half-assed takes of any random Southern drug-centric album to have been released since Jeezy first got on his thug motivational regime.

You also know the guest list for this one before you’ve even scanned the credits. As is mandatory these days, it has to feature Rick Ross on a track (“Harder”

). It does, and it sounds exactly like every other track the Bawse has been paid to rap on in the last six months. It also features the annoying 2 Chainz (“Cases”

), who has already plagued mixtapes by T.I. and Rick Ross this year. It cobbles together some of those hotly-hyped young uns – this time Big K.R.I.T., Big Sean, Wale and Wiz Khalifa, on the bouncy “Go Girl.”

And, just to prove that Southern rappers don’t discriminate against Hip Hop’s birthplace, Jadakiss is roped in for a cameo (“Red White And Blue”).

On the plus side? Mercifully, at least Live From The Kitchen is only 11 tracks long, and there are enough cameos and singles to fuel your party bus. That’s something, right?